Ben (John Ritter) puts his foot down and decides to rescue his son Junior (Michael Oliver) from Beck (Michael Richards).  After a crazy stint at a circus trapeze act and a wacky chase, Beck is arrested, but before being taken away he shoots Ben in the chest.  Remorseful, believing Ben is dead, Junior apologizes to him and expresses how much he loves him.  But then, Ben gets up; it turns out the bullet hit a button from Big Ben’s (Jack Warden’s) campaign he had in his pocket – as well as the age-old, good-luck prune -.  As they are about to walk away together, Junior gets rid of the bow tie, and Ben is thrilled that the kid already calls him “Dad”.

Meanwhile, Flo (Amy Yasbeck), Ben’s callous wife, who had been tossed away into a pig’s truck in the confusion of the chase, manages to get out of the suitcase she was in, only to run into a pig’s butt.  The movie ends. 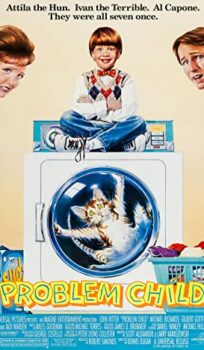