SHORT VERSION:
Just before he is supposed to go on Dexter’s global television broadcast to show the world that aliens exist and supposedly gain perpetual safety from Col. Milfoil as a result of it (and secretly be auctioned off by Dexter for a large sum of money and give him vindication from the U.S. government discrediting his belief in the existence of aliens), ALF becomes overwhelmed by a combination of stage fright and Dexter’s increasing hostility and locks himself in the bathroom. Milfoil and his men then storm in – with Rick in tow – and pull the plug on the broadcast and take Dexter and his associates away.

Milfoil then has ALF and Melissa seized, going back on the deal Rick had made with him where he agreed to take him to ALF so long as ALF and Melissa’s safety would be assured. Noticing Dexter’s security camera nearby, Rick surreptitiously focuses it on him and Milfoil and then tricks Milfoil into revealing his earlier plot to murder ALF back at Fort Edmonds with a poison serum and then have the crime pinned on his subordinate, 2nd Lt. Reese. The recording later gets into Reese’s hands, and he plays it for Gen. Stone as he is in Milfoil’s office praising him for capturing ALF, enlightening him to Milfoil’s true character. Milfoil’s fate is not shown, but it can be safely assumed that he was discharged from the Air Force and sent to prison.

At the Alien Task Force’s next committee hearing, Stone awards Melissa, Rick, and Reese with promotions in rank for their good work, and ALF is made an ambassador to Earth.

LONG VERSION:
ALF, Melissa (Jensen Daggett), and Rick (William McCarthy) head to the home of Dexter Moyers (Miguel Ferrer) and his assistant Nina (Liz Coke) to seek the former’s help in keeping ALF safe from Col. Milfoil (Martin Sheen). A short time into their stay, Dexter tells them that he has a plan that will guarantee ALF’s perpetual safety. He explains that he has started putting together a live television interview via satellite with renowned talk show host Nigel Neville (Dennis Creaghan), which will air worldwide tomorrow night, and he will go public with ALF in this interview. Once everyone in the world sees ALF, Milfoil won’t be able to touch him. ALF and Melissa like this plan, but Rick isn’t comfortable with it, and he starts to grow suspicious of Dexter.

That night, ALF wakes up Rick seeking his assistance in contacting Murphy (Michael Weatherred) back at Fort Edmonds on Dexter’s computer to arrange a supply drop of items he needs. As they are accessing it, Rick stumbles across a program called “Operation: Payback” which displays ALF’s name and a bid estimate list. Before he can look at it any further, Dexter shows up and shuts the program off, and he tells them that he is here out of concern because, whenever the computer gets turned on, so does the nearby security camera, and it videotapes everything in the room. His suspicions about Dexter stirred even further, Rick wakes Melissa and briefly tells her about Operation: Payback before Dexter suddenly appears, forcing him to cut the conversation short.

Rick stealthily leaves the premises that night, and seeing no other alternative to saving ALF from whatever Operation: Payback is, he contacts his co-worker Pete (Jeremiah Birkett) at Fort Edmonds from a diner the next morning, knowing that Milfoil will trace the call and find him. His plan succeeds, and after Milfoil and his men apprehend him, he brokers a deal with Milfoil where he will lead him and his men to ALF’s location in exchange for ALF and Melissa’s safety.

Meanwhile, during preparations for the broadcast, Melissa privately asks Dexter about Operation: Payback, since Rick had informed her of it and she had now just overheard two of his associates talking about it. He reveals that the operation is a secret auction that will be held during the broadcast, with ALF as the merchandise, and ALF will be sold to the highest bidder. Melissa refuses to cooperate with this, so Dexter has her locked up in a spare bedroom without ALF knowing. As he does that, he tells her that ALF’s exposure will also give him vindication from the U.S. government discrediting his belief in the existence of extraterrestrial life and strip them of their credibility.

Moments before he is supposed to go on the air, ALF becomes overwhelmed by a combination of stage fright and Dexter and Nina’s increasing hostility and locks himself in the bathroom. Milfoil and his men – with Rick in tow – then storm the house and pull the plug on the broadcast, and Dexter and his associates are taken away.

Milfoil then reneges on his deal with Rick by having his men find and seize ALF and Melissa, and he tells Rick that he and Melissa will be court-martialed and ALF will be dead by next week’s Alien Task Force Committee hearing. After noticing the security camera and remembering what Dexter had told him about it, Rick surreptitiously turns on the computer to get the camera to focus on and videotape him and Milfoil, and then he brings up Milfoil’s original plot to kill ALF back at Fort Edmonds by showing him the requisition form for the poison serum he had ordered that he was going to use for the crime. Milfoil denies having filled out such a form and points out that 2nd Lt. Reese’s (Scott Michael Campbell) signature is on the paper, and he reveals that he had intended to use that as evidence to get the murder pinned on Reese. He then burns the form and has Rick taken away.

The trio are brought back to Fort Edmonds, and ALF is placed under armed guard, but at some unseen point, Rick’s tape finds its way into Reese’s hands. Milfoil pays ALF a visit and tells him with sickening satisfaction that his “escape attempt” will give the committee a valid reason to exterminate him. However, as Gen. Stone (John Schuck) is in Milfoil’s office praising him for capturing ALF, Reese enters with Rick’s tape and plays it for Stone, enlightening him to Milfoil’s true character. Though Milfoil’s fate is not shown, it can be safely assumed that he was discharged from the Air Force and sent to prison.

At the committee hearing, Stone and the other committee members issue an official apology to ALF, Melissa, and Rick, and ALF is named an ambassador to Earth while Melissa, Rick, and Reese receive promotions in rank (Reese for bringing forth the evidence which took down Milfoil and Melissa and Rick for their work on Project: ALF). Melissa teases Rick over how she is still his superior officer, and he suggests that they discuss it over dinner. She accepts the dinner date, finally beginning their blossoming romance. The movie closes with ALF exhibiting his usual self-aggrandizing behavior. 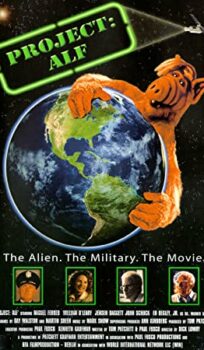