Long, long version:
We open with a muscular pale white alien on a desolate planet. He drinks something and dies, his body falling into a river and dissolving into the water.

Cut to later, and Elizabeth Shaw (Noomi Rapace) finds an ancient archeological site with a cave painting showing a tall being and a pattern of stars. She’s very excited as this same pattern is found in many places and many cultures.

We then cut to some years later on board the Prometheus. The robot David is running the ship whilst the crew is in hypersleep. They arrive at their destination and the crew wake. They include the Weyland company executive Meredith Vickers (Charlize Theron), who is paying for the mission. Shaw briefs everyone on the reason for the mission, which they have not so far been told – she believes that aliens created life on Earth and that the constellation of stars drawn in the cave painting shows where the aliens come from – the planet they are now arriving at. She calls the aliens Engineers, as she believes they engineered us.

They take the ship down and find an ancient structure, landing nearby. Exploring, they find it abandoned and dead – but the body of a giant alien is there, along with a room full of odd cases which seem full of black slime. The alien looks just like the “Space Jockey” from the movie Alien.

Most of them head back to the ship as a powerful storm arrives, taking the skull of the alien with them, but two of the expedition are cut off and left behind and must spend the night in the structure.

The alien skull turns out to not be a skull at all but a helmet – the head inside is the same pale skin humanoid species as the alien we see at the start of the film. They try to reanimate it but the procedure goes wrong and the head erupts with goo, almost contaminating the ship.

David, meanwhile, has been acting on orders from some unseen source, apparently acting at odds with the others. He gets a sample of the black goo and deliberately infects Shaw’s boyfriend, who has sex with Shaw and infects her unknowingly.

Back in the structure the cases have leaked black goo all over the place. There are worm like creatures in the goo that kill the two scientists left behind. After the storm clears and the team come back they are horrified to find the bodies. Shaw’s boyfriend collapses, sick, and they rush back to the ship. But Meredith refuses to let him in and, as the infection is raging through him, he begs her to kill him. She uses a flamethrower on him and he collapses.

Shaw comes aboard and finds that she is pregnant – but with an alien, a result of her infection. David tries to force her to keep the creature but she uses a robot surgeon to remove it – a horrible squid-like creature. Shaw leaves the squid thing locked in the infirmary and warns them all that they have to leave. The Engineer aliens are warriors of some sort, and the various monsters are things they have created as biological weapons. Rather than the “meeting with the gods” she hoped for they have found a planet of horrors, basically.

However, it turns out that the source of David’s secret orders is the company head himself, Peter Weyland. He is very old, and hopes the Engineer aliens might be able to restore his health with their advanced knowledge. Under his orders they all go back to the ship and revive the last surviving Engineer, who has been sleeping in a hypersleep tube.

But it goes wrong – the Engineer rips David’s head off and brains Weyland with it, activating his ship as Shaw escapes. Apparently the Engineers created life on Earth (this appears to be what the one we saw at the beginning was doing, seeding Earth with his own DNA), and now they intend to destroy it with their monsters.

As his ship lifts off – it’s identical to the one the Nostromo finds – the Prometheus captain takes off and rams it, bringing it down. Meredith escapes the crash in a lifeboat which contains the infirmary Shaw used, with the squid monster still in it, but she is then killed as the alien ship comes down, leaving only Shaw – and David’s head, which is still operating.

The Engineer pilot also survives the crash and comes after Shaw, chasing her into the lifeboat. She releases the squid monster and it jumps on him, ramming a tube into his throat. Shaw escapes with David’s head and they take another alien ship. She sets off, determined to find the alien home world and ask them why they decided to destroy Earth. 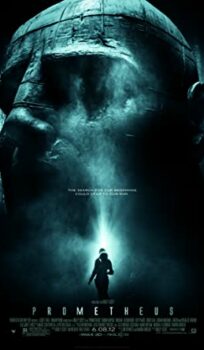