Mattie (Kristen Bell) is devastated by the mysterious death of her boyfriend Josh (Jonathan Tucker), but she and her friends are terrified when they start receiving emails from him saying “HELP ME” over and over again.

Throughout the film, many people are taken by the “grey people”, strange ghost-like creatures.  Josh, Stone, Tim, and Isabel, four of Mattie’s friends, are eventually taken by these creatures and absorbed.  Mattie turns to Dexter (Ian Somerhalder), a man who purchased Josh’s computer who gets involved…especially when he finds out that the computer’s not hooked up and strange messages and images are getting through.

There’s a confrontation at a computer factory with Douglas Zieglar (Kel O’Neill), who reveals that the grey people are dead spirits that can travel back through low-bandwith technology.  He explains they can’t get through red tape because it acts as high bandwith.  Mattie and Josh try to stop the upload of these spirits with a “cure” program, but it doesn’t work, and they get out of the building just as a big jet airliner comes crashing into it.  They load up into a truck and drive away, hoping to escape the nightmare.

They awaken the next day and find grey people surrounding the car, trying to get them.  He is able to drive and shake them off, and Mattie throws out her cell phone- the piece of technology that helped track them.  They eventually get to a survivor zone where other humans have escaped these beings, and the last shot we see is Josh, the victim from the beginning of the movie, in the city, overtaken by them. 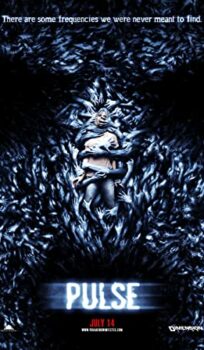