POOPER:
The farmer (Lance Henriksen) who called the demon becomes the demon for the next man to call.

LONGER VERSION:
This creature feature directed by fx master Stan Winston starts in the 1950s. Young child Ed Harley is barricaded in his house with his parents. That night, a clearly terrified man begins pounding on their door, begging for help. Harley’s parents steadfastly ignore him. Young Ed peeks through a window and witnesses a giant creature capture and kill the man. This creature is named Pumpkinhead (Tom Woodruff, Jr.).

Jumping to present day, a grown up Ed Harley (Lance Henrikson) is a widower. The only joy in his life is his young son. One day, a group of teens from the city stops by his grocery store to get supplies for their weekend at a local cabin. Two of the teens begin dirt biking in the hills surrounding the grocery store (one of the teens is drunk). While Ed is away from the store, the drunk dirt biker accidentally hits the young boy, severely injuring him. Although the drunk teen flees (he has a record, and driving drunk would violate his parole), the rest truly try to help Ed’s son. Most of the teens drive off in search of a phone, leaving one of them behind with the child.

Ed returns and finds most of the teens gone and his son gravely injured. Though the teen who stayed behind tries to explain what happened, Ed just assumes they hit and ran. Ed takes his son home where he dies in Ed’s arms. Remembering Pumpkinhead, he asks his elderly neighbor to tell him where an old witch lives. Though the neighbor refuses, one of the man’s grandchildren (one of whom is a very young Mayim Bialik) agrees to take Ed to the witch (for some cash). The witch tells Ed to dig up the corpse of a demon from the nearby wild pumpkin patch, and then she will help him get his revenge. When he retrieves the demon’s corpse, she resurrects the demonic entity known as Pumpkinhead.

Pumpkinhead goes off to the cabin where the teens are still arguing about what to do. The teens eventually convince the drunk driver to turn himself in. Before they can do anything, Pumpkinhead attacks and slaughters three of the teens as the other three (including the one who actually hit Ed’s son) flee. It turns out that Ed is linked to Pumpkinhead and he witnesses each murder through the demon’s eyes. Realizing the folly of his quest for vengeance, Ed tries to stop Pumpkinhead, but to no avail. The demon eventually captures and fatally impales the teen that killed Ed’s son, but will not rest until the other two are dead as well.

Though most of the neighbors refuse to help the remaining teens (just as Ed’s parents had done decades earlier), the grandchild that led Ed to the witch’s house decides to aid the survivors. He takes the teens to an abandoned church, believing that Pumpkinhead can’t walk on sacred ground. The grandchild is wrong as Pumpkinhead breaks into the church and kills another teen. The sole remaining teen and grandchild are found by Ed and they go to his house to make one last stand. Ed himself is being transformed into a Pumpkinhead type creature (revealed to be the “price” the witch told Ed he would need to pay to summon the demon). Ed realizes that if he is wounded or hurt, Pumpkinhead is also wounded or hurt. He tries to kill himself, but fails. The sole remaining teen realizes what Ed was trying to do and shoots him dead. As Ed dies, Pumpkinhead collapses and bursts into flames.

In the end, we see that Ed’s corpse has completely turned into a new body for Pumpkinhead. The witch retrieves Ed’s corpse and buries it in the pumpkin patch so that Pumpkinhead can be summoned again in the future.

No order of deaths as, besides some cool impalements, everyone that dies is simply clawed to death by Pumpkinhead. 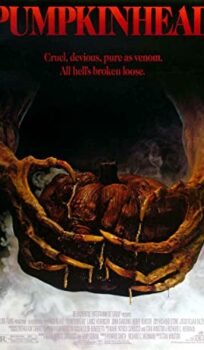