Kira (Camilla Belle) didn’t know where she hid the syringe of experimental serum because she had her memory erased. She will die unless she continues getting treatment from the Division, so she goes back to Carver (Djimon Hounsou).  Carver uses his power makes her think that she is an agent working for the Division, and that she never had a relationship with Nick (Chris Evans).

Nick and Cassie (Dakota Fanning) and still have to figure out how to find the syringe and stay ahead of the Division and the Pop family. Using Cassie’s watcher powers, and with the help of a shadow, a sniffer, a shifter, and a memory eraser, they carry out an elaborate plan (mostly shown not explained) using written notes. Our heroes manage to stay alive and retreive the syringe. After a climactic fight, Nick makes Carver think he killed himself with the serum.

After Carver and Kira leave, Cassie and Nick walk away with the real syringe. They note that Cassie’s mother has probably been planning this since before Cassie was born.

Kira is on an airplane going back to the US with Carver. She finds the envelope written to her from Nick. She remembers he told her to read it. In the envelope she finds a picture of her and Nick at Coney Island (a memory Carver made her forget). A note written on the photo says “Kill him. See you soon!” Kira smiles and uses her power to tell Carver to shoot himself.

The film ends with a cut to black and the sound of a gunshot.

(The film conclusion is somewhat open-ended, and obviously set up for a sequel. Several important questions are left unanswered: Who is Cassie’s mother, and where is she? How will the syringe help destroy the division? What does the serum do?) 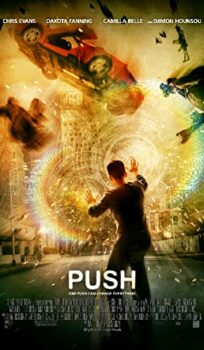