Pooper:
Puss finally changes his ways, and Death leaves him in peace to live his final life. Puss steals a ship and sails away with his romantic partner Kitty Softpaws and their best friend Perro.

Long Ending:
Puss in Boots (voiced by Antonio Banderas) has returned to his adventurous ways – traveling the countryside, drinking, singing, and carousing. During a battle where he beats a giant, Puss is killed but springs back to life. A veterinarian explains that as a cat, Puss has nine lives. But the vet warns Puss that he is on his last life, having died eight times prior (most due to his own vanity and hubris). Later that night, Puss is approached in a bar by a villainous Big Bad Wolf (Wagner Moura) with glowing red eyes. The Wolf attacks Puss and, for the first time ever, Puss is injured by his opponent. Puss sees his lives flash before his eyes and, realizing he can’t win, flees the battle in terror.

Puss goes into retirement and lives with an old cat lady. He grows depressed and unconcerned with the world around him. His only friend is an abandoned dog named Perro (voiced by Harvey Guillén), that pretends to be a cat to get free meals from the cat lady. One day, bounty hunter Goldilocks (voiced by Florence Pugh) and the 3 Bears (Papa, voiced by Ray Winstone, Mama, voiced by Olivia Coleman, and Baby, voiced by Samson Kayo) arrive at the cat lady’s place looking for Puss in Boots, having tracked his scent there. They hope to recruit Puss to help them steal a map that leads to a wishing star. The map is held by crime boss Jack Horner (voiced by John Mulaney). They don’t recognize Puss due to his bearded and slovenly appearance and soon leave the home. Puss realizes that if he gets the star, he could wish for the return of his full set of 9 lives. Puss dons his boots and ventures off to steal the map himself. Perro excitedly follows along on the journey.

Puss infiltrates Jack Horner’s lair only to find an old comrade named Kitty Softpaws (voiced by Salma Hayek) also trying to steal the map. After Goldilocks and the 3 Bears show up, a large fight breaks out between the various factions. The cats decide to work together and successfully steal the map. Along with Perro, they follow the map to the Dark Forest (where the star is located) with Goldilocks and Jack Horner, respectively, in hot pursuit. As they face the dangers on the path to the Wishing Star, Perro learns that Puss and Kitty were engaged but that Puss (fearing marriage would dull his legend) didn’t show up at the ceremony. Kitty later reveals she didn’t show up either since she realized Puss would never abandon his reputation for her. It becomes clear that Kitty wants to wish for true love, but as they continue their journey, she becomes enamored with the older, more selfless Puss.

During one confrontation, Perro is kidnapped by Goldilocks and the 3 Bears, and the map is lost. Kitty goes to rescue Perro (where they learn that Goldilocks intends to wish for a “normal” human family) and Puss goes to retrieve the map. Inside a cavern where the map lies, Puss runs into the Big Bad Wolf. The Wolf reveals that he is, in fact, Death. The Wolf notes he was there for each of Puss’ prior eight deaths but that Puss was simply too arrogant to notice him. Disgusted at how Puss wasted his prior lives, Death relishes the opportunity to kill him once and for all. Puss again flees in terror to get to the wishing star, abandoning his friends. Meanwhile, the wholly amoral Jack Horner destroys everything in his path (even willingly sacrificing his own henchmen) to pursue the heroes.

All the characters arrive at the wishing star as Puss prepares to make his wish. A fight breaks out, and Baby Bear is almost killed when he begins falling into a portal generated by the star. Goldilocks abandons her pursuit of the map (which contains the incantation needed to make a wish) to save her brother, finally realizing that the Bears are her true family even if they aren’t human. Death suddenly appears and faces Puss one more time. This time, the feline does not flee in terror but fights back, saying he will do whatever it takes to preserve his last life so he can be with Kitty and Perro. Respecting that Puss has changed and that he’s abandoned his vanity, Death agrees to let Puss live out this final life in peace, and Puss and Kitty embrace.

Jack Horner then grabs the map and plans to wish to possess all the magical powers in the world so that he can rule it. Goldilocks, the 3 Bears, Perro, Kitty, and Puss all team up to stop Jack by destroying the Wishing Star. They succeed, and the resulting explosion kills Jack Horner.

The film then ends with the Kitty, Puss, and Perro stealing a boat to visit Puss’ friends in Far Far Away land. 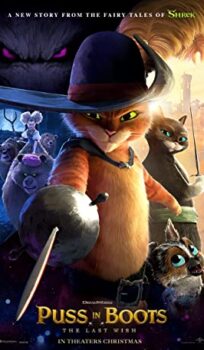