Bond (Daniel Craig) and Camille (Olga Kurylenko) are after Dominic Greene (Mathieu Amalric) and General Medrano (Joaquin Cosio), respectively, for the murder of Vesper Lynd and Camille’s parents and sister, respectively. Greene is in league with the General in order to corner Bolivia’s water supply and set himself and the criminal organization “Quantum” up as Bolivia’s primary water and utility provider.

Bond and Camille track Greene and the General to Greene’s fuel cell-powered sanctuary in the Bolivian desert. Bond crashes a truck into the place, igniting the hydrogen which runs the fuel cells. While the place explodes, Camille fights Medrano and Greene beats Bond with a pipe until Bond manages to chop Greene’s foot with a fire axe. Bond lets Greene escape in order to rescue Camille from a burning room after she shoots Medrano. Bond tracks Greene down in the desert and gets information about Quantum before leaving him in the middle of the desert with only a quart of motor oil to drink. Bond and Camille part company after exacting their respective vengeance and both finding themselves unfulfilled.

Bond tracks Vesper’s boyfriend to Russia where he is romancing a Canadian agent. Bond has the chance to kill him, but instead hands him over to MI6 custody. M (Judi Dench) tells Bond that Greene was found dead in the desert with two bullets in the back of his head and a quart of oil in his stomach.

Along the way British embassy staff worker Strawberry Fields (I’m not kidding) makes love with Bond, only to be killed and covered with oil like the girl in Goldfinger, Mathis (Giancarlo Giannini) is killed saving Bond from the Bolivian police, Felix Leiter (Jeffrey Wright) gives Bond information, saves him from an ambush and gets a CIA promotion and Mr. White (Jesper Christensen) escapes from MI6 custody.

(Look for homages to at least three previous Bond films throughout the movie.) 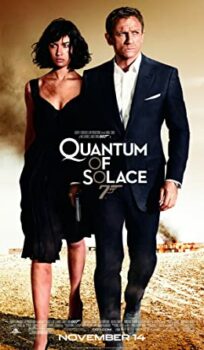