Kayley (voiced by Jessalyn Gilsig), Garrett (voiced by Cary Elwes), and the two-headed dragon Devon (voiced by Eric Idle) & Cornwall (voiced by Don Rickles) manage to retrieve the Excalibur sword from an ogre in a cave before Ruber (voiced by Gary Oldman) and his mechanical henchmen get it, and they then evade Ruber & company after exiting the cave. They make it to the fields outside Camelot, but Garrett refuses to come with Kayley and Devon & Cornwall to return the sword, feeling he wouldn’t belong in Camelot. Kayley and the others, after unsuccessfully trying to change his mind, press on, but some time later Ruber captures Kayley and takes Excalibur from her. Devon & Cornwall avoid being captured by hiding, and soon after rush to find Garrett to tell him what happened. Kayley meets her mother Juliana (voiced by Jane Seymour) in Ruber’s wagon, but the reunion is short-lived, for Ruber takes Juliana away so he can use her to gain entrance to King Arthur’s (voiced by Pierce Brosnan) castle.

Ruber and his goons successfully enter the castle courtyard using Juliana and begin attacking the soldiers. Ruber then enters the castle to find and slay King Arthur. Bladebeak (voiced by Jaleel White) cuts Hayley’s bounds, and Hayley goes to stop Ruber. She gets cornered by Ruber’s goons, but is saved by the arriving Garrett and Devon & Cornwall (who could now fly and breathe fire because they learned to cooperate with each other). Hayley & Garrett go inside the castle and take a secret passage to the room where the Round Table is, and arrive just in time to stop Ruber before he can lay the fatal blow to King Arthur. Hayley knocks Ruber outside, and she eventually tricks him into putting Excalibur back into its stone, and when he does a bright light comes out of it and goes out over Camelot, which restores Ruber’s mechanical henchmen into ordinary men (and turns Bladebeak back into his normal chicken self) and rips apart Ruber.

The next scene shows Kayley and Garrett marrying each other, and Arthur knights them both and makes them Knights of the Round Table. They then take off on a horse for elsewhere, with the sign “Just Knighted” hanging off the back of the horse. 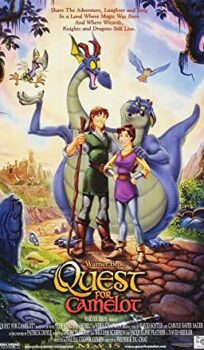