At the peak of their seemingly unmanageable emotional crisis, Howie (Aaron Eckhart) and Becca (Nicole Kidman) spend a night apart from each other, yet surrounded by atypical events:  Becca drives over to see Jason (Miles Teller) -the boy responsible for her son’s death-, while Howie goes over to see fellow support group member Gaby (Sandra Oh) -and very likely try and sleep with her-.  However, he can’t bring himself to do it and tearfully apologizes and leaves.  He spents the night in his dead child’s bedroom, which is now empty.

Meanwhile, Becca, after noticing Jason all dressed up to go to his Senior School Prom, breaks down -which he notices as he passes by next to her- and ends up falling asleep (at the same time, we see a brief flashback of the accident that claimed Becca’s son’s life, although the kid’s death is off-screen).  The next morning, Jason comes back from his all-nighter and wakes her up.  They walk to the nearby park and have a chat, in which she expresses the boy how much she likes his comic book; they also debate about the existence of “parallel universes with alternate versions of everyone” and agree that “there must be another one of them being happy”.

Upon Becca returning home, both she and Howie talk about having their neighbors over for a cookout, as their son’s birthday is close.  Their conversation about what they will do for the event, as well as what they shall keep doing in order to carry on and continue living is heard as a voice-over on scenes of the get-together taking place.  The final scene shows them sitting side by side, holding hands as they watch a sunset. 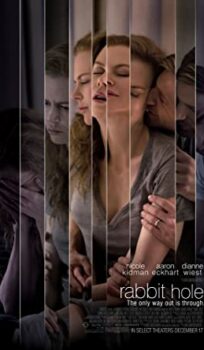