After a motorcycle crash, Rose (Marilyn Chambers) is taken to a hospital where she is given an experimental skin graft. When she wakes up from her coma she has grown a retractable protrusion in her armpit, which she uses to skewer people and drink some of the blood, which is the only thing she can now eat. The people she drains wake up groggy and unable to remember the incident, and within six to eight hours become violent, blood-thirsty, and foam at the mouth.

As Rose makes her way from the hospital to Montreal, where her boyfriend is, the disease spreads, and martial law is declared in the territory as the body count rises.

Eventually the boyfriend discovers Rose over the body of her best friend and she runs off when he confronts her. She decides to see if she really is the cause of the plague by taking some blood from a man and then locking both of them inside his apartment. The man wakes up rabid and attacks Rose as her boyfriend screams down the phone for her to escape.

Rose is killed and her body thrown into the disposal lorries along with the bodies of everyone who died from the infection. 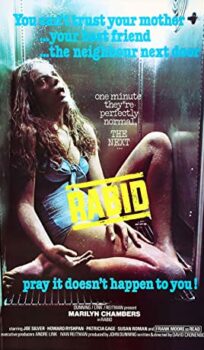