After various obstacles including a storm, sabotage from the bullies, Snoopy and Woodstock getting separated and lost, the gang is united at an abandoned cabin. The next morning, they get back into the race. With the bullies having destroyed their boats, the boys and girls climb into the raft which is all that’s left of the girl’s boat.

With Charlie Brown leading them, they sail through more obstacles created by more sabotage from the bullies. After passing over a waterfall, the bullies crash their boat into rocks, allowing the gang to pass. Unfortunately, the girls accidentally knock the boys overboard while celebrating an early victory. Going back for them, the girls are knocked overboard by the bullies. Before the bullies can cross the finish line, their boat sinks. They destroy Snoopy’s float in an attempt to stop him from winning, but Woodstock builds a raft out of the debris. The bullies’ cat Brutus tries to stop him, but Snoopy punches him, allowing Woodstock to cross the finish line and win the race.

The bullies vow revenge next year, but back off after Snoopy punches Brutus again. While getting on the bus to take everyone home, Peppermint Patty tells Charlie Brown the experience has been good for him. Filled with true confidence and high esteem for the first time in his life, Charlie Brown reflects on this long enough for the bus to take off without him, forcing him to hitch a ride home with Snoopy.

Unlike the other Charlie Brown movies, there are no pictures of the people who made the movie during the ending credits. 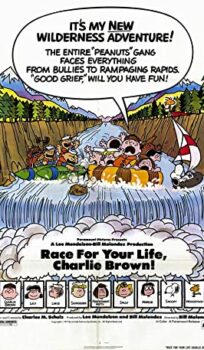