*This movie is loosely based on the true story of the Konawaena High School Solar Car Team, who competed in the World Solar Challenge in 1990. Though they finished in eighteenth place overall, they came in first place amongst the high school entries.

On the last day of the race, the solar car catches fire outside Adelaide, and the smoke causes Uni (Sara Tanaka), the current driver, to crash it. After Gilbert (J. Moki Cho) gets her free from the car and Frank (James Belushi) puts the fire out, the team finds that the car is still operational, but since all of their drivers have succumbed to one thing or another during the race, they believe that they are done for. Gilbert then reveals that he still has his wrist band that all registered drivers must have to legally drive the car (Marco [Dion Basco] had earlier thrown it into a trash can near Gilbert because he believed that the car wouldn’t move with him in it due to him being obese). Seeing a shred of hope, the team decides to let him drive, but they are forced to remove the solar panels and hood so the car will be able to take his weight, leaving the car running on whatever battery power is left and cruising at a slower speed.

The team makes it to Adelaide and makes their approach towards the finish line, but find themselves right behind the arrogant Hans Kooiman (Steve Zahn) of the European team, and he repeatedly cuts them off so they can’t pass him. Marco – who is now riding along with Gilbert – directs Gilbert into doing some swerve tricks, which ends up confusing Hans and causes him to make his car roll over onto its roof when he turns hard around a corner. Gilbert and Marco get ahead of him, and despite the front wheels suddenly breaking off from the strain of their combined weight, they slide along the ground right over the finish line and win third place.

As the gang celebrates, Gilbert and Uni – who had become attracted to each other even before he rescued her – start kissing, and Oni (Nadja Pionilla) kisses Marco. Upon returning to Hawaii, Sandra (Halle Berry) finally moves on from her failed marriage by discarding her wedding ring. 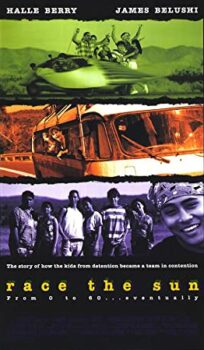