Due to Clara Dalrymple’s (Wendy Malick’s) jealousy, Stripes the zebra (voice of Frankie Muniz) is entered in the Kentucky Open thoroughbred race. Stripes thinks he won’t be able to win, but when horseflies Buzz and Scuzz (Steve Harvey, David Spade) bring him a message from Tucker (voice of Dustin Hoffman) that it’s OK to give up, Stripes gets inspired to “leave it all on the track,” and he wins by a nose (literally). 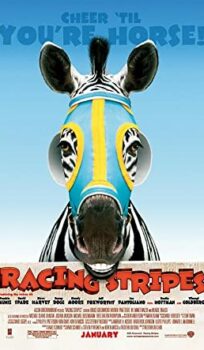