Reverential yarn, with a wonderful John Barry musical score, that has been rendered completely inaccurate by the actual discovery and scientific investigation of the Titanic wreck.

This adaptation of Clive Cussler’s Cold War novel is about a project to raise the ill-fated liner in order to find a cargo hold full of byzanium, a radioactive mineral energy source that can be used to power ‘The Sicilian Project’, a missile defense shield around the United States.

The Titanic is raised in a spectacular scene and towed into New York Harbor accompanied by a parade of tall ships after the holes in her hull are patched, the hull is filled with foam, buoyant tanks are attached to her sides and inflated and explosive charges shake the ship loose from the silt. In so doing, three men are killed when the submersible ‘Starfish’ springs a leak and implodes and Dr. Gene Seagram (David Selby) and three other men barely escape death after their submersible ‘Deep Quest’ becomes lodged in a skylight. The ‘Deep Quest’ is jarred loose when the Titanic surfaces and the men are saved.

The Russians, who learned about the byzanium and the operation from a spy on the salvage ship and are watching the operation from a “fishing trawler”, threaten to sink the newly raised Titanic, but are prevented when a U.S. submarine and U.S. fighter aircraft appear by surprise. The byzanium is actually not onboard the Titanic. Arthur Brewster, a secret agent who died in the cargo hold when the Titanic sank, actually hid the byzanium in the false grave of Jake Hobart, an American miner who actually died mining the Byzanium on a remote Arctic island claimed by both the U.S. and the Soviet Union, in the English town of Southby.

In a departure from the novel, Dr. Gene Seagram (David Selby) decides not to dig up the grave after being warned by Sandecker (Jason Robards) that a byzanium bomb, thousands of times more powerful than anything mankind has ever produced, could be manufactured.

Look for Alec Guinness who plays a survivor of the disaster. Richard Jordan and Anne Archer round out the cast. 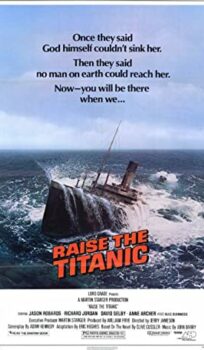