Wreck-It Ralph and Vanellope Von Schweetz have been best friends for the last six years, though Vanellope has begun to feel bored of Sugar Rush. When the steering wheel on the game’s console is broken, Mr. Litwak unplugs the game, leaving the Sugar Rush residents homeless. Fix-It Felix and Sergeant Calhoun temporarily adopt the Sugar Rush racers while Ralph decides to take Vanellope into the newly-added WiFi router so that they can travel into the internet and find a replacement piece on eBay.

Ralph and Vanellope find the piece, but they claim it at such a ridiculous price that they are unable to pay it off. They are told by a pop-up named Spamley that they can earn money by playing games online. The two enter Slaughter Race to steal the car of one of the game’s residents, Shank. Vanellope almost succeeds and ends up loving it in Slaughter Race, and Shank finds herself respecting Vanellope’s skills. However, this makes Ralph a bit jealous.

Shank sends Ralph and Vanellope to Yesss, an algorithm that helps Ralph make viral videos that earn him currency. Meanwhile, Vanellope ends up meeting the Disney Princesses and is inspired to go after what she wants, being to start living in Slaughter Race. When Ralph learns about this, he goes to the dark web to find a creature named Double Dan that gives him a virus to bring into Slaughter Race to try and make it boring for Vanellope. This backfires as the virus not only almost kills Vanellope, but after she finds out what Ralph did, the virus scans Ralph and creates clones of him that start to wreak havoc upon the whole internet. With the help of Yesss, Ralph comes to terms with his insecurities and possessive feeling toward Vanellope, accepting that she can be free to do what makes her happy. The virus disappears, and Ralph is saved by the Disney Princesses.

Ralph and Vanellope say their goodbyes as she decides to stay in Slaughter Race, but they remain friends and still keep in touch. 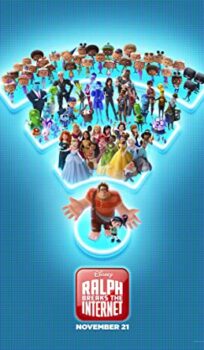