An experimental mutagen developed by a company called Energyne is spread throughout parts of America, causing mutations in a gorilla (George), a wolf (Ralph), and a crocodile (Lizzie). The animals become gigantic and aggressive monsters that cause destruction and mayhem.

Primatologist Davis Okoye (Dwayne Johnson), who raised George after recovering him from poachers, teams up with Kate Caldwell (Naomie Harris), who previously worked with Energyne, and government agent Harvey Russell (Jeffrey Dean Morgan) to stop the monsters from harming innocent lives. Claire Wyden (Malin Akerman), mastermind behind the mutagen and CEO of Energyne, calls the monsters to Chicago using a radio frequency, leading the monsters to tear the city apart.

Davis and Kate recover an antidote sample that they give to George by placing it with Claire and getting him to devour her. George is back to normal as far as his personality goes, but he is still enormous. This proves to be an advantage since Ralph and Lizzie are still going nuts. Davis tricks Ralph into getting his head eaten by Lizzie while George rams a pole through Lizzie’s head before she can eat Davis.

The city (or what’s left of it) is saved, and Davis now needs to find George a new home, but the two remain close friends. 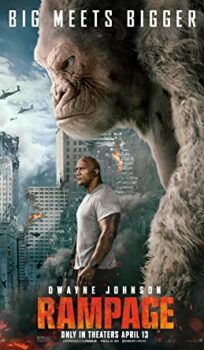