Sir Charles Ranier (Ronald Colman), unable to feel true romantic love due to nagging doubts and fears about the three-year-long period in his life for which he has no memory, proposes a marriage of convenience to his private secretary, Margaret Hanson (Greer Garson).

Years later, heartbroken over living in a loveless marriage, Margaret departs on an extended vacation, first to the country, and then on to South America; Ranier travels to the village of Melbridge to help stop a labour strike.

In spite of never having been there before, he discovers that he knows his way around the town, and starts to recover some memory of the lost three years of his life. Beginning at the sanitarium, he re-traces his steps through his foggy recollections, and eventually arrives at the front door of the cottage where he lived. As the key that he has carried in his pocket all those years unlocks the front door, he hears a voice behind him call out “Smithy.” Turning around, he sees Margaret, realizes that she is really Paula Ridgeway, truly the love of his life, and the woman to whom he (as “John Smith”)was married during his time of amnesia. He addresses her as “Paula” and covers her with kisses. 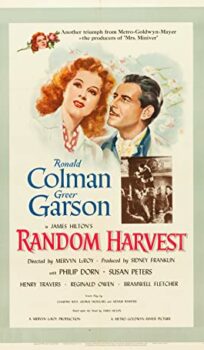