POOPER:
Raya and allies from the neighboring nations manage to reform the orb, which restores the waters, revives the dragons (including previously killed Sisu), and drives away the Druun. As Raya’s father awakens from his six-year stone slumber, he sees members of the other nations finally willing to leave in peace.

Long ago, the land of Kumandra was prosperous and thriving, with dragons roaming the land. However, the conflicts of man led to the creation of the Druun, dark spirits that turn humans to stone and lay waste to the land. The dragons entrusted their sibling Sisu with the Dragon Gem, which she used to trap the Druun and restore the humans, but the dragons remained stone. The humans split into five clans – Tail, Talon, Spine, Fang, and Heart – to divide the land.

500 years later, Chief Benja of the Heart clan tries to unite the tribes at a feast. His daughter Raya tries to befriend Namaari, daughter of the Fang clan’s Chief Virana, but Namaari tricks Raya into showing her where Heart guards the Dragon Gem in an attempt to seize it for Fang. The other clans fight for it, causing it to shatter and revive the Druun. The pieces are taken by the chiefs of each clan, but Benja gives Raya their piece so that she can eventually find a way to repair the Gem and unite everyone, just before he and countless others are turned to stone.

Six years later, Raya and her pet Tuk Tuk have scoured the land in search of the Gem pieces. Raya manages to summon Sisu and uses her help in locating the other pieces, all of which provide Sisu with a power using the magic of her siblings. Namaari and her Fang warriors are also after the pieces, but more for control over the land. Raya and Sisu meet others like Boun, a 10-year-old who operates a boat with shrimp for money; Noi, a baby con artist who uses her partners, Ongis, to scam others; and Tong, a warrior who is the last in his village. All of them lost people to the Druun, and they all help Raya and Sisu in their quest.

When the heroes must get the last piece from Fang, Sisu tries to get Raya to trust Namaari and form a truce to get what they need. This backfires after Namaari threatens them with a crossbow, and Raya uses her sword to disarm her, only for an arrow to accidentally hit Sisu. Her apparent death causes the water in the land to dry up, now leaving nothing to keep the Druun from attacking. They begin to take out the surviving people. Raya fights Namaari once more until they and Raya’s friends are all trapped with their Gem pieces. Remembering Sisu’s words, Raya decides to trust Namaari to put the Gem back together. After Raya and her friends do so and turn to stone, Namaari puts the Gem back together, and the Druun are gone for good. The humans and dragons are all revived, and the dragons use their magic to revive Sisu.

Raya parts ways with her friends as they may finally reunite with their families, and she now views Namaari as a friend. Raya returns to Benja, and the other clans arrive to finally restore Kumandra to its former glory. 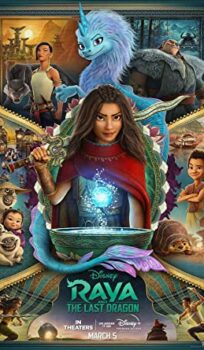