Submitted by Evil Ed (Pooper) and Evan B (Long)

Long Ending:
The film opens with people bursting into the office of Dr. Hans Gruber, responding to his screams. They open the door and see his flesh dissolving. In the corner stands Herbert West (Jeffry Combs), holding a syringe. One of the onlookers claims West killed Dr. Gruber, but he responds that he simply gave Gruber life.

The story jumps ahead to a hospital in Massachusetts. Dan Cain (Bruce Abbott) is a medical student who also works in the hospital’s morgue part-time. He is secretly engaged to Megan Halsey (Barbara Crampton), who is the daughter of the school’s Dean (Robert Sampson). The medical school’s top professor is Dr. Carl Hill (David Gale), who has studied the ability of the brain to live beyond the bodies’ death. Dr. Hill also has a unrequited lust for Megan. Herbert West enrolls in the school and wastes no time making a name for himself – accusing Dr. Hill of being a charlatan and plagiarist.

Herbert responds to an ad that Dan posted for a roommate, and against Megan’s advice, Dan allows Herbert to live with him. Megan doesn’t trust Herbert, who admittedly is very odd and rude. One day, while looking for their pet cat, Megan goes into Herbert’s room and finds the cat dead in his mini-fridge. She accuses Herbert of killing the cat, though he claims he simply found it dead when he came home and hid the body to spare her feelings.

Later that night, Dan hears a commotion from the basement. He goes down to find the previously deceased cat alive and attacking West. Dan re-kills the cat and demands answers. Herbert divulges that he has developed a re-animating serum that can bring dead creatures back to life. He wants to begin human trials and wants Dan to help him access the corpses in the hospital morgue. Megan also walks in on Dan and West re-animating the cat once again (to prove to Dan the serum works), and leaves in disgust at them both.

Dan decides to approach Dean Halsey about the situation. The Dean thinks Dan is crazy and summarily expels both Dan and West from the school. Having nothing left to lose, Dan sneaks West into the morgue and they begin looking for an ideal test subject. West injects a corpse with his serum and it comes back to life. Unfortunately, the corpse has super-strength and immediately attempts to kill Dan and West. At that moment, the Dean walks in and is killed by the rampaging corpse before West and Dan re-kill it. West theorizes that they can control a freshly reanimated corpse, so they immediately inject Dean Halsey with the serum. He too attacks West, but his assault stops when Megan enters the morgue and Dean Halsey begins crying in shame. Believing the Dean to have had a nervous breakdown, Dr. Hill takes custody of him for observation.

Dr. Hill won’t allow Megan to see her father. Though she is angry that Dan has seemingly helped drive her father mad, she gets him to help her break in to the office where her father is being held. Dan discovers that Dr. Hill has given an unauthorized lobotomy to the Dean, rendering him docile. Meanwhile, Dr. Hill deduces that the Dean was actually dead and restored to life, and he breaks into West’s lab. He then confronts West and promises to turn him into the authorities on trumped up charges unless he gives the serum to him. Dr. Hill intends to publicize the serum as his own discovery. West distracts Dr. Hill and then decapitates him. To see what happens, West injects both the head and the body of Dr. Hill with the serum. To his surprise, both body parts re-animate, and the head can telepathically control the body. The body knocks out West and steals the serum.

Dr. Hill returns to his office and discovers that, thanks to the lobotomy, he can also control the Dean. He sends the Dean to abduct Megan and bring her to the morgue. Meanwhile, West locates Dan and the two run off to stop Dr. Hill. They find him in the morgue where he has been molesting a restrained Megan and insisting she will be his wife. The two confront Dr. Hill, who reveals that he used the stolen serum to reanimate lobotomized corpses in the morgue. The three are attacked by the corpses (with Dr. Hill stating that he will simply re-animate Megan as his slave if she is killed). Megan screams to her dad for help and he regains his humanity, attacking the other zombies and crushing Dr. Hill’s head. West injects more serum into Dr. Hill’s body to cause an overdose. It works, but Dr. Hill’s organs are re-animated too and his intestines strangle West to death. Dan grabs the remaining serum and flees with Megan.

Before they can escape, one of the remaining corpses strangles Megan. Dan attempts to resuscitate her, but to no avail. He begins to cry, but then he remembers he has the bag with the remaining re-animating serum. He pulls out the needle and the screen cuts to black. We then hear the screams of a re-animated Megan as the credits begin to roll. 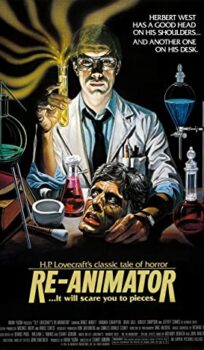