Submitted by Evan (LONG) and Brad (Pooper and Order)

Pooper:
Grace (Samara Weaving) marries Alex (Mark O’Brien), but, due to a family “tradition,” must play a randomly selected game on her wedding night to officially be part of his family. Unfortunately, she draws the “Hide and Seek” card, which means that Alex’s relatives must hunt down and kill her by sunrise.

The family is revealed to have made a pact with Satan to receive wealth and power in exchange for a sacrifice, if someone draws the Hide and Seek card. If they don’t kill Grace by sunrise, the family will allegedly be punished, though some family members doubt the validity of this.

After Grace kills Alex’s mother, Becky (Andie MacDowell), Alex realizes that Grace will never be with him after what she’s witnessed and tries to kill her, but the family is terrified to see the sun rising. When nothing happens, they realize that the curse is a lie- until the family members all explode into a bloody mess one by one. Grace tells Alex that she wants a divorce before he too explodes and Grace walks away as the family mansion burns to the ground.

Long Ending:
The film begins 30 years earlier as a man in a tuxedo stumbles through the mansion of the Le Domas family. An arrow is lodged into his stomach. He begs a young boy named Daniel Le Domas for help. After some consideration, Daniel instead calls out that he has found the man. A number of adult members of the Le Domas family appear, shoot the man with another arrow, and drag him into a room. Daniel sadly watches the doors shut.

Jumping to the present, we meet Grace (Samara Weaving). She is a young woman who grew up in foster homes. But she is about to be married to Alex Le Domas (Mark O’Brien). His family is insanely wealthy, having built an empire on the success of numerous board games. Grace is genuinely in love with Alex regardless of his family money, but is eager to finally have a family to call her own. Alex had been estranged from his family for years, but reconnected upon becoming engaged. The couple get married and prepare to spend the night in the Le Domas mansion.

Alex explains that it is family tradition for a new spouse to play a game with their family on their wedding night. He also tells Grace that simply playing the game will gain her acceptance amongst his family. Though Alex looks guilty, Grace is thrilled at the opportunity. She goes down to the game room where she is met by Alex’s parents Tony (Henry Czerny) and Becky (Andie MacDowell), his cruel Aunt Helene (Nicky Guadagni), his drunken brother Daniel (Adam Brody) and his wife Charity (Elyse Levesque), and his drug-addled sister Emilie (Melanie Scrofano) and her husband Fitch (Kristian Bruun) and their two kids. They prepare to play the game.

Tony explains that their Le Domas ancestor once met a mysterious man who gifted the ancestor a box that inspired all the games that built their fortune. However, the mysterious man required they play a game every time a new person marries into the family. The game can be as tame as Chess or Old Maid (which were the games drawn by Charity and Fitch respectively)… but they don’t tell Grace there is one game that is fatal for the person drawing the card. She draws a card from the box and reveals the game as Hide and Seek. Grace runs off to hide after being told that she must stay hidden until dawn. Unknown to her, this is the fatal game. The family arm themselves with weapons and, if they find Grace, intend to maim her and then sacrifice her to the devil (who was the mysterious man their ancestor dealt with). If they don’t catch and sacrifice Grace before dawn, however, Tony and Aunt Helene are convinced all members of the Le Domas family will die. Although most of the other family members are skeptical of the satanic legend or that they will die if they lose, they proceed with playing the game. It is also revealed that Aunt Helene’s husband was the victim from the flashback who was sacrificed to Satan.

Grace soon realizes the deadly nature of the game when she observes the family accidentally kill a maid that they thought was her. She reconnects with Alex who finally explains the entire situation (saying he hadn’t told her before because he knew she wouldn’t marry him if she had known and also saying that he didn’t think she would draw the hide and seek card as that card rarely is drawn). Alex helps out Grace by breaking into the security room where he disables the security system and unlocks all the doors and windows of the mansion. Alex is then knocked out by his family and restrained in a room, with Becky expressing her belief that Alex will eventually side with them over Grace.

Over the course of the night, most of the family’s support staff is killed (usually accidentally) by either Grace or the Le Domas family. Grace is found a few times by Daniel, but he always lets her escape or get a head start before calling his family. He says he wants to help her, but is a coward (noting that Andy, and not him, left the family). Grace is wounded by one of Emilie’s sons, but manages to escape outside the estate. She is eventually recaptured by the Le Domas’ butler/musician and dragged back to the mansion.

With mere minutes before dawn, Grace is strapped to a sacrificial altar as a sacrifice to satan. However, the family all become ill before slaughtering her and it is revealed that Daniel laced the sacramental wine with drugs. He rescues Grace, but is mortally wounded by his wife as they flee. The family attacks Grace, but she incapacitates each of them (and a fire is started in the struggle). During a fierce battle, Grace bludgeons Becky to death. Alex (who had finally escaped) arrives to see Grace kill his mother. Realizing that his relationship is over, Alex betrays Grace and restrains her. However, before Alex can kill Grace, the family cries out as dawn has arrived. It initially appears that nothing will happen and the entire story was indeed a fiction. But then Aunt Helene spontaneously combusts in an eruption of blood. Each member of the family soon explodes in turn (including Emilie’s kids), culminating in Grace throwing the ring at Alex and declaring herself divorced before he too erupts. Covered in viscera, Grace leaves the burning mansion. She lights a cigarette and smokes in peace as the police arrive at the scene. 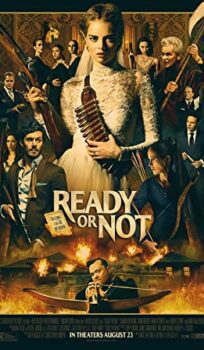