During the Atom-Zeus climactic boxing match, Zeus manages to inflict a severe amount of damage on Atom, also getting injured itself.  Towards the end of the match, realizing that its vocal receptors have been affected and it might lead to its defeat, Charlie (Hugh Jackman) gets convinced by Max (Dakota Goyo) to carry on with the fight by means of shadow boxing – throwing punches from outside the ring, which Atom would still be perfectly capable of mimicking.

Charlie agrees and the final round starts.  By means of this technique, as well as Charlie coming to realize and predict Zeus’s movements, Atom gets to knock Zeus down twice, at the amazement of the crowd and Tak’s (Karl Yune’s) shock and anger.  The second time, though, the fight is finished by the ref before Zeus is declared KO’d, which leads to a decision based on points by punches.

Zeus ends up being declared the winner, although by barely a few points over Atom, but both it and its team get booed off by the crowd, whereas Atom has earned the title of “People’s Champion” and gets a unanimous cheer from everyone, including Debra (Hope Davis), Marvin (James Rebhorn) and Bailey (Evangeline Lilly).  At the same time, Charlie and Max reassure their father-son love for each other. 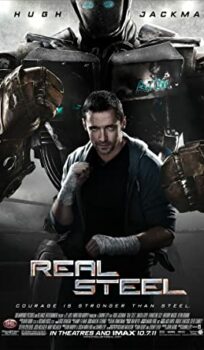