An unusual role for a young John Wayne, where he plays a villain, loses the girl to Ray Milland, and dies in this movie.

In the 1840’s, there is a dangerous shipping route through the Florida keys.  Scavenger crews wait to recover cargo from ships lost on the reefs.  Jack Stuart (John Wayne) is a captain whose ship runs up on the reef.  Brothers King Cutler and Dan Cutler (Robert Preston) get his cargo, while he is rescued by Loxi (Paulette Goddard).  Loxi is a young lady running the salvage business her father started.  The Cutler brothers are always first to the wrecks, and they are suspected of causing the wrecks.

While Stuart recovers, he and Loxi fall in love.  Dan Cutler is in love with Loxi’s cousin Drusilla.  Steve Tolliver, the head of the shipping company and Stuart’s boss,  falls in love with Loxi.  To keep Drusilla away from Dan, the family sends her to Havana.  Stuart is given command of the flagship of the company, the Southern Cross, sailing back from Havana to Key West.  Drusilla boards as a stoway, to get back to Dan.  Tolliver learns that Stuart has made a deal with the Cutler brothers to wreck the ship, and split the value of the cargo.

Tolliver commandeers a ship to intercept Stuart and stop the destruction of the Southern Cross.  Loxi is on board.  She refuses to believe that Stuart would do such a thing, so she takes an axe to the rigging, disabling them at sea.  As they drift towards the reef, they see Stuart sail the Southern Cross full speed into the reef.  Stuart is put on trial for intentionally crashing his ship.  Loxi testifies against Stuart.  One of the sailors testifies that he heard a woman’s death scream, (Drusilla was hiding on board).  If someone died in the wreck, it will add murder to the charges.  They need divers to go down and look for signs of a woman on board.  The only two who will dare dive are Tolliver and Stuart.  Cutler and Stuart have a plan to block Tolliver’s air hose and kill Tolliver under sea.

In the dive, they find Drusilla’s shawl.  Loxi’s friends prevent the blockage of Tolliver’s airline.  They are attacked by a giant squid.  The current pushes the ship off the reef, where Stuart is dragged down to his death trapped in the squid’s tentacles.  Tolliver comes up with the shawl, showing Drusilla died in the wreck.  Dan Cutler, overcome by the loss of Drusilla, begins to reveal all the dirty dealings of his brother, King Cutler.  King Cutler shoots Dan. Tolliver shoots King Cutler.

The movie ends with Loxi and Tolliver married in Charleston. 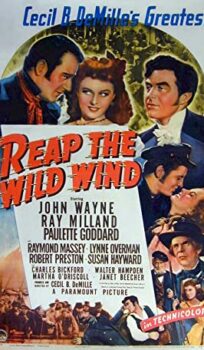