The movie centers around three troubled teens, Jim Stark (James Dean), Judy (Natalie Wood), and Plato (Sal Mineo). All of them have unhappy home lives and feel like outsiders at school, even though Judy is the girlfriend of the the leader of the “cool gang.”

One night Judy’s boyfriend Buzz challenges Jim to a “chicken run,” in which the teens drive their cars towards a cliff and the last person to jump out of the car is the “chicken.” The dangerous game ends in tragedy though when Buzz dies from the chicken run.

Jim is devastated by the death of his friend. Jim’s father promises to be a stronger role model.

*Plato might be the first openly gay teen in American movies 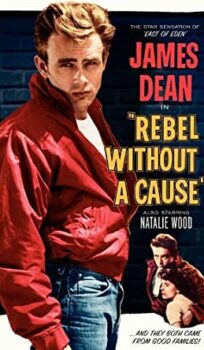