The story starts at the wedding ceremony/reception of Koldo (Diego Martin) and Clara (Leticia Dolera), who is also pregnant. One of the guests is Koldo’s drunken uncle, who arrives with a bandaged hand and a story about getting bit by a dog. He’s actually infected with the same virus from the last two films, and in no time the infection spreads throughout the panicked wedding guests. The film also ditches the first person filming style after the first 20 minutes or so.

Clara and Koldo become separated in the huge villa where the reception is being held. Koldo finds a suit of armor, while she turns out to be very adept with a chainsaw. Whenever the infected are shown in mirrors they resemble Nina Medeiros, the possessed woman from the previous movies (a news broadcast at one point shows the quarantined building from Part 1, meaning this is happening at the same time). A priest accompanying Clara knows about the infection, calling it the end of days.

The couple is eventually reunited, but cornered in a kitchen by the infected hordes. The priest, however, survives with the aid of a crucifix and he starts broadcasting prayers over the PA system, which stops the undead in their tracks. Bride and groom make it outside, where she gets bitten on the hand by Koldo’s deaf grandfather (who wasn’t able to hear the prayers since his hearing aid was turned off). Koldo chops her arm off with a sword, but she still becomes infected.

Koldo discovers the whole villa closed off and quarantined by authorities. He carries his bride outside the gates and lets her bite him, and they are both shot to death by police squads. 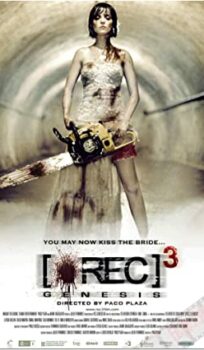