Frank (Willis), Marvin (Malkovich), Sarah (Parker), Victoria (Mirren), Han Cho Bai (Lee) and Katja (Zeta-Jones), end up working together to stop Bailey (Anthony Hopkins). Bailey is an imprisioned chemical/bomb genius, who plans on using a “red mercury” bomb which he invented, to blow up an embassy and terrorize England and the US to get revenge for the murder of his family by MI-6 and the CIA.

Frank and Sarah’s relationship deepens, as he starts to trust her to be one of the RED team instead of treating her like a fragile China Doll.

The RED teams outwits Bailey by placing the red mercury bomb on his plane, which explodes in mid air, saving everyone on the ground, and eliminating the threat.

Frank, Sarah and Marvin agree they work well together, and are starting another project as the movie ends. 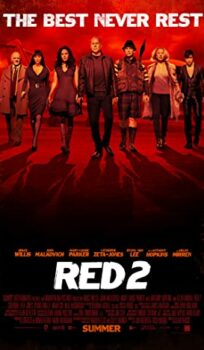