The werewolf is Valerie’s dad, Cesaire (Billy Burke). He reveals himself to Valerie (Amanda Seyfried) in his human form after having already killed Grandma (offscreen) once she discovered his identity. Valerie could understand him telepathically as the wolf because she is his offspring. He wanted to change her and her sister into werewolves during the blood moon (as his own father, a werewolf, had done to him years earlier). He was trying to persuade the girls to leave the village with him for the city and more fertile hunting grounds. He explains that when the younger girl could not hear him telepathically, he realized she was not actually his daughter and, in a rage, killed her. Valerie declares she will not be a murderer like him and refuses his offer. Peter (Shiloh Fernandez) shows up, ax in hand to save her, despite the fact Valerie had wounded him earlier when she feared he was the wolf. The two men struggle, with Peter delivering a wounding ax to the back and Valerie finishing Cesaire off by stabbing him with Solomon’s silver fingernails (yes, she picked up the disembodied hand and put it in her basket).

With the wolf dead, Peter realizes he has been bitten in the scuffle. Knowing that he is cursed to become a werewolf, he leaves Valerie. He hopes to be able to control himself as the wolf. Valerie says she will wait for him. Time passes and Valerie moves to her grandma’s house. As the movie closes, she steps outside to see a non-threatening werewolf approach. She smiles, knowing it is Peter coming back to her. 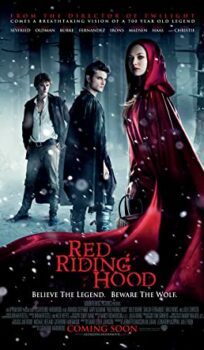