An unusual role for John Wayne, playing the villain in this movie

In 1851, a wagon train is heading west. Thomas Dunson (John Wayne) likes the fertile land he sees, and decides to stay there and build his ranch.  The lady he loves is in the wagon train, but he forces her to go on without him. He says it will be too rough at the start, and he will send for her when he is settled in.  Shortly after Dunson leaves, the wagon train is attacked.  The only survivor is Matt, a boy who was off chasing a runaway cow during the attack.  Dunson takes Matt in as an adopted son.

About 15 years later, Matt (Montgomery Clift) is returning from serving in the civil war.  Dunson has a huge herd of cattle, but they are worthless in post-war Texas.  He has to get them north to sell, and decides to mount a huge 1000 mile cattle drive to Missouri.  He hires a large crew of cowboys. They hear stories of marauding gangs of former soldiers attacking cattle drives, and some men want to quit.  Any one who tries to leave is killed in cold blood by Dunson.  They also hear of another railroad center in Abilene Kansas that is eager to buy cattle.  Dunson is a mean tyrant, and will not listen to anyone.  They meet the lone survivor of another cattle drive, who tells of being attacked by a band of over 100 men when they crossed into Missouri.  Matt ends up leading a revolt, where Dunson is disarmed and expelled from the group.  Dunson swears that he will catch and kill Matt.

Along the way, the cattle drive rescues a party that is travelling west from an Indian attack.  Matt and Tess fall in love, but Matt leaves her to continue the drive.

When they reach Abilene, Matt gets a much better price for the cattle than Dunson would have received in Missouri.  He has all the checks made out to Dunson.  Others think Dunson will be happy when he gets the money, but Matt knows that if Dunson swore to kill him, Dunson will carry it out.  Dunson catches up with Matt in Abilene, and attacks him. Matt refuses to fight back against the man who raised him. Tess pulls a gun on the men.  She forces them to admit they love each other.  Dunson sees in Matt and Tess a repeat of the mistake he made in losing the woman he loved.  Dunson tells Matt to marry Tess, and that they will change the D on the brand to a DM (for Dunson and Matt). 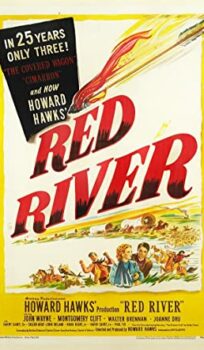