*The film Arnold Schwarzenegger considers to be the worst film he has ever done.

Red Sonja (Brigitte Nielsen), Lord Kalidor (Arnold Schwarzenegger), Prince Tarn (Ernie Reyes, Jr.), and Falkon (Paul L. Smith) make it to Queen Gedren’s (Sandahl Bergman) castle, and by this point, the Talisman’s power is almost out of control and is beginning to make the castle fall apart, but Gedren is so drunk with power over it that she won’t lift a finger to keep it in check. Sonja, Kalidor, and Falkon decide to sneak in to face Gedren and get the Talisman while Tarn covers the main doorway, but their attempt at stealth doesn’t last long, and they find themselves battling Gedren’s soldiers at every turn. Gedren’s aide-de-camp Ikol (Ronald Lacey) tries to escape out the main door, but he is stopped by Tarn, and Tarn accidentally causes him to get fatally crushed under the door as it closes again.

Tarn starts looking for Gedren himself and happens upon the throne room, but Gedren emerges from a hiding place there and grabs him. Sonja then appears, and after Tarn gets free of Gedren when the castle’s destruction begins to worsen, he is sent by Sonja to find Kalidor and Falkon. She and Gedren then cross swords, and the battle goes from the throne room to the Chamber of Lights where the Talisman is being kept, and Gedren locks them both inside. Kalidor, Tarn, and Falkon appear outside the door and see what is going on, so Kalidor and Falkon start using their strength to lift the door up to try to get Sonja out, but Tarn slips in underneath hoping to do harm to Gedren. The chamber floor suddenly splits open into a chasm containing a river of lava below, and Tarn gets pinned underneath a pillar. Sonja soon plunges her sword into Gedren’s chest, and she falls to her death in the lava, and Sonja then throws the Talisman in after her to destroy it. This causes the castle to start exploding, so she frees Tarn and then gets out through the door with Kalidor’s and Falkon’s help, and together they all safely escape the castle before it is reduced to rubble.

As the quartet reach an open field, Sonja points out the way back to Hablok for Tarn and Falkon, and Tarn extends an invitation to her and Kalidor to come visit his kingdom once it is rebuilt. Sonja and Kalidor then kiss while Tarn and Falkon begin their journey back home. 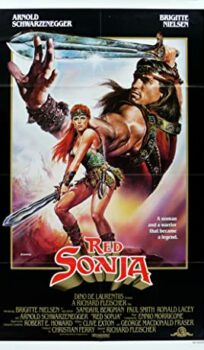