The man, Otto Wallisch, that Zev (Christopher Plummer) is searching for, is himself.

When Zev (Christopher Plummer) confronts the 4th Rudy Kurlander (Jürgen Prochnow) the man reveals that he is real name is actually Kunibert Strum and that Zev is Otto. They both stole the identities of Jewish men and tattooed prisoner numbers on their arms to escape punishment. In shock, Zev kills the man and in a quick moment of clarity tells his son that “I remember.” Overcome with the truth that he was a monster and not a victim, Zev/Otto commits suicide.

The film ends at Zev’s nursing home as the residents hear about the murder/suicide Zev committed. Max (Martin Landau) who had been Zev’s confidant and helped him plan the mission, tells everyone Zev’s true identity and that he and Kunibert  murdered his entire family. Max had recognized Zev from the moment he arrived and had psychologically manipulated the dementia suffering Zev into tracking down “Rudy Kurlander” in order to get revenge against both men for ruining his life. 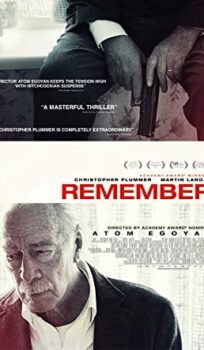