SHORT VERSION:
Through teaching the course, Bill regains a sense of purpose in life, and he also changes his tune about his daughter Emily wanting to become an astronomer by buying her a telescope and a plane ticket to join her astronomy class on a trip to Mexico to watch an eclipse. Also, with the help of Staff Sgt. Marie Layton at the army base’s administration office, Bill gains access to the records on Pvt. Davis’ father (whom he keeps saying is a Vietnam War hero), and he later gives them to Sgt. Cass and tells him to do what he thinks is right. Bill and Marie also end up dating each other.

The day after, Bill’s students show up to his class to take their final exam, despite having been told that they are not required to and they would be discharged from the army if they took it and failed, and they all pass the exam and his class with flying colors. At the graduation ceremony, Colonel James brings up Davis’ father and his heroism, and he awards Davis his father’s Silver Star. As the graduating class marches, Bill gets a salute from his students.

Bill signs up for another teaching term and also finally gets on friendly terms with Cass.

LONG VERSION:
After seeing that Hobbs (Khalil Kain) shows much intelligence, Bill (Danny DeVito) pays a visit to Capt. Murdoch (James Remar) and asks him to look into Hobbs’ record to see if he has any credentials that could land him much better opportunities in life. A day later, Murdoch, Sgt. Cass (Gregory Hines), and military police come up to Hobbs in the cafeteria and place him under arrest, and Bill sees him being escorted out. Murdoch explains to Bill that he found out that Hobbs’ first name is Nathaniel, not Roosevelt, and that he is a wanted crack dealer who was undoubtedly hiding out in the army to avoid arrest. The following day, Bill explains to the class how his actions led to Hobbs’ arrest, and while he is sorry for what happened, he is not sorry for trying to help Hobbs. He explains to the class that the choices we make dictate the lives we lead (“to thine own self be true”).

After saying this, he rips up his advertising ideas that he had drawn up in an attempt to get another job in that field and starts to fully commit himself to the teaching job, and even takes the class up to Canada to watch Henry V in a theatre. He also pawns an expensive item of his to get the money needed to give his daughter Emily (Alanna Ubach) a telescope and a plane ticket so she can join her school’s astronomy club on a trip to Mexico to watch an eclipse, finally supporting her dreams of becoming an astronomer. Bill also goes to the base’s administration office to try to access the files of Pvt. Davis’s (Peter Simmons) father, whom he keeps saying is a Vietnam War hero. He gets acquainted with Shana (Samaria Graham) and her supervisor, Staff Sgt. Marie Layton (Isabella Hofmann), and though sparks start to fly between Bill and Marie, she won’t permit him to see the files.

Bill sets up an exam for the class the week they graduate from basic training, but he is told by Murdoch that the soldiers don’t need to take it, and if they do and fail, they will all be discharged from the army. Bill then gets a letter from Hobbs, who tells him that the letters he and Murdoch have sent to the prison warden in support of him will possibly result in his release soon. He also checked out Othello from the prison library, the first inmate to do so in years, and the librarian asked if he would consider taking college classes. He replied that, if a few of the teachers were like Bill, he just might. Bill tells the rest of the class about what Murdoch had said to him about the test, and he leaves the decision of whether to take it or not up to them.

A few nights later, he goes on a date with Marie. Shana shows up with Davis’ files and hands them to Bill, and Marie tells him to show those to Sgt. Cass first. Bill happily thanks them both and kisses Marie, and he takes off back to the base. He finds Cass doing a drill, with his students among them. After seeing Bill, Cass has Pvt. Melvin (Greg Sporleder) come forth and demands for him to recite some Shakespeare, but he cannot. Cass then has Pvt. Benitez (Lillo Brancato, Jr.) come forth and repeats the same demand, and Benitez proceeds to recite the entire St. Crispin’s Day speech from Henry V, which makes Bill proud, gets the attention of the other soldiers and their subsequent praise, and even moves Cass. Bill then presents Cass with Davis’ father’s records and tells him to do what he thinks is right. The next day, the soldiers report to Bill’s class, having decided to take the final exam, and they all pass with flying colors.

At the graduation ceremony, Bill is in attendance with Emily, and they acknowledge Marie, whom he has gone steady with. Colonel James (Cliff Robertson) brings up Davis’ father and his heroic efforts in the Vietnam War, and then goes up to Davis and presents him with his father’s Silver Star. As Bill’s students march along with the graduates, they give him a salute.

At the start of the next recruitment, Bill signs up for another teaching term, and he and Cass talk in a friendly manner to each other. Cass then makes some new recruits march to the Hamlet-style cadence Bill had created. 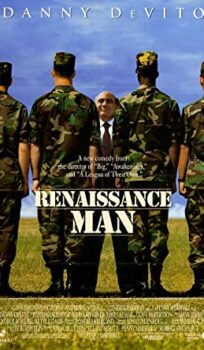