Lt. Finch (Bill Smitrovich) and Denny Ramson (Peter MacNeill) are the dirty cops working for Marino (Robert Knepper). Finch was the one who tipped off Marino to Buster McHenry’s (Kiefer Sutherland) undercover operation and nearly got him killed.

After Marino murders Hank Storm’s (Lou Diamond Phillips) father and brother, as well as Barbara (Jami Gertz), Buster and Hank raid Marino’s ranch, killing his men, along with Ransom. Finch is killed by Marino but Buster gets ahold of the spear Marino stole from Hank’s family earlier in the film and throws it into his chest, killing him.

The film ends with Hank getting a tour guide job in Texas and Buster coming to see him. Buster says despite being put on probation, he’ll probably get a commendation for discovering the dirty cops and thanks Hank for his help. 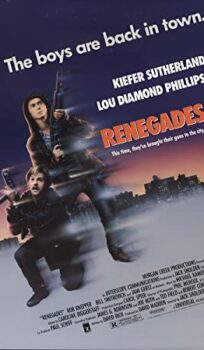