Remy, a man who repossess artificial organs for The Union, cannot keep up the payments on his own organ and is tracked down by his best friend Jake. Jake confesses to setting Remy up with the accident that caused him to need an artificial heart, so Remy would need to continue working to make the payments and things would never change between them.  After a fight where Remy knocks Jake unconscious, Remy finally makes it to the mainframe computer to remove his records from The Union, with Jake eventually helping him.  Remy, his girlfriend and Jake escape to a tropical island paradise.

The paradise turns out to be a figment of the neural net, a new artificial device created by The Union.  Remy was brain damaged by Jake during the fight, and Jake had Remy placed on the machine.  After paying off Remy’s heart, Jake will now work the rest of his life to continue to make payments to keep Remy in a continuous state of bliss. 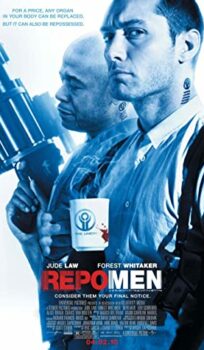