The film is a spoof of “The Exorcist” and opens with Nielsen’s Father Mayii performing an exorcism on Nancy( Linda Blair) and nearly dying. After the exorcism the demon’s voice can be heard saying I’ll be back.

Years later Nancy, now a mother of two preteens is watching TV with her family when the remote breaks and she goes over to the TV to change the dial, yes the movie is that old, but she becomes hypnotised by the program it stopped on – The Ernest and Fanny Miracle Hour, a play on the televangelist craze of the 80s with Ned Beatty as Ernest. As she stares at the screen, a spirit leaves the screen enters her body and while her family begins to complain that she has not changed the channel her head spins around and she vomits pea soup, covering her husband. Right after she is herself again and upset, her husband writes it off as PMS, puntasticness begins.

Over the course of the film Nancy enlists the aid of Father Brophy who tries to get Mayii, who refuses. Brophy then turns to his elders, with Ernest in attendance who suggest an on air exorcism.

During the exorcism though, the demon reveals he used Ernest and Fanny to get on TV and possess their audience. Brophy kills the camera before the demon can do so and after watching the program on TV, Mayii decides to perform the exorcism. The demon agrees to the exorcism and the whole thing is treated like a WWF wrestling challenge, complete with Jesse Ventura and Mean Gene commentating.

In the end after trying different methods, Mayii is able to banish the demon to hell by performing devil in a blue dress after it accidentially reveals that it hates rock and roll. 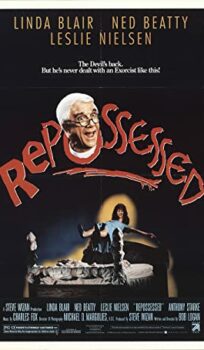