Requiem for a Heavyweight(1962)

Washed-up boxer Luis “Mountain” Rivera (Anthony Quinn) finds out that his manager Maish (Jackie Gleason) had gotten deeply into debt with bookies by betting that Cassius Clay (played by Cassius Clay/Muhammad Ali himself) would knock out Rivera early. Rivera ruined Maish’s plans by gamely hanging in there, taking punishment, and not going down until the later rounds.

Feeling betrayed, Rivera walks out on Maish, planning to start a new life. But when he sees that Maish may be beaten up or even killed, he reluctantly agrees to bail Maish out by humiliating himself, and becoming a professional wrestler.

A new young boxer comes to work with Maish, who gives the youngster a brutally frank speech about the world of boxing.

As the movie closes, we see Rivera in a wrestling ring, dressed up in an Indian headdress, doing an embarrassing Indian war dance. He is being sold to the wrestling crowd as “Big Chief Rivera,” and he’s about to take on rotund wrestler Haystacks Calhoun.

NOTE: The original TV production of “Requiem for a Heavyweight” starred Jack Palance, whose character was called “Mountain” McClintock. The original ending was different and happier. McClintock, who was going to be marketed as a hillbilly wrestler, leaves the city and takes a job working with kids at a summer camp. As the TV movie ends, McClintock is on a train, headed for his new job. He strikes up a friendly conversation with a little boy on the train, and starts to show the boy some boxing moves. 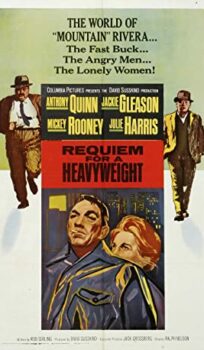