Dieter Dengler (Christian Bale) crashes in Vietnamese territory and is captured by soldiers. He is thrown in a POW camp with Americans and Vietnamese.

During his time there, he finds out the other prisoners have been there 2 years. He begins to plan an escape with them after some skepticism from the others.

The day of the escape, plans go wrong as they ambush the guards, but they make it out. Dengler goes into the jungle with Duane (Steve Zahn).

After some time, they come to a village and Duane is killed by a villager in front of Dengler. Dengler gets away and has visions that Duane is still with him.

Later on, Dengler is rescued. He is taken to a hospital and is being questioned by CIA when his old friends sneak him out and take him back to his base where everybody is waiting to celebrate his return. 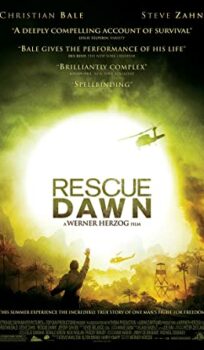