Alice (Milla Jovovich) once again is taking on the Umbrella Corporation and the zombies let loose on the world.

After having her powers removed and humanity restored by Umbrella Corp. Japan manager Albert Wesker (Shawn Roberts), Alice tries to find her old friends who have flown to Arcadia, a place claiming to be a safe haven, free of infection. Upon.arriving, she finds Arcadia is a ghost town, the lone survivor being her old ally Claire Redfield (Ali Larter) whom Alice rescues. Claire suffers from amnesia and can’t remember what had happened to the rest of their group.

On their return to the mainland, they crashland their plane on the roof of a prison under seige by various zombies and inhabited by a group of seven survivors. The zombies eventually break in and kill all but Alice, Claire, Claire’s brother Chris Redfield (Wentworth Miller), and movie producer Bennett (Kim Coates) who had stolen Alice’s plane to escape.

Claire regains her memories and tells Alice that Umbrella Corp. has captured all of those who lived on Arcadia and is using them for genetic experiments on a ship (also called Arcadia). The three heroes eventually make their way to the ship and free all of the captives before discovering that Albert Wesker is still alive (and Bennett is now acting as an assistant to Wesker). After a long fight, the heroes kill Bennett, but Albert Wesker escapes in a fighter plane. Albert Wesker activates the self-destruct mechanism for the ship, only to discover too late that Alice had earlier placed the mechanism in his plane, and he blows himself up.

The captives are all saved and the three heroes decide to turn the the ship Arcadia into the safe haven it was meant to be. It is also shown that Luther (a hero from the prison who appeared to have been eaten) made it out of the prison alive after all.

Unfortunately, (in a scene after the credits), a bunch of Umbrella Corp. fighter planes arrive, under the command of the mind-controlled Jill Valentine (Alice’s former ally) who promises a sequel in which her forces will take on Alice and the Redfields. 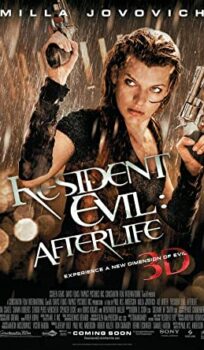