Dr. Issacs (Iain Glen) is trying to find a anti-virus from Alice’s (Milla Jovovich) blood, but since she escaped from the facility, he has been using clones of her to find a perfect match.  All the clones die, but Issacs uses the clones’ blood to test the anti-virus on zombies. When injected, the zombies become domesticated (kind of like Bud from Day of the Dead), but soon after it turns them into super-zombies and they go on a rampage.

During this, Alice is roaming the desert by herself because she can’t control her powers from the end of the last movie. She has violent dreams which levitate objects around her, during one time, she crashes her motorcycle. She finds a journal at a gas station that says Alaska is free of infection, whereas the entire world in barren.

Alice catches up to Claire Redfield’s (Ali Larter) convoy with uninfected humans, including Carlos (Oded Fehr) and L.J. (Mike Epps). During an attack by infected crows, which kills Nurse Betty (Ashanti), Alice shows up and uses her psionic power to kill the crows with a sky of fire. She tells the convoy of the journal which they decide to use and go to Alaska. Because of the supplies they need, they decide to have to go to Las Vegas. During this, Umbrella Corp. tracks Alice’s location and Issacs goes after her.

When the convoy arrives in Las Vegas, it is a desert. While looking for gas, Umbrella drops a container full of super-zombies to kill everyone. During the lengthy fight, L.J. becomes a zombie, from a bite earlier, and bites Carlos. Carlos kills him. Many of the convoy members are killed during the attack while Umbrella tries to shut down Alice. They fail which gives her enough time to kill them and the zombies. Issacs escapes in a helicopter and the survivors follow. Carlos sacrifices himself to open a pathway to the entrance to the heli-pad of Umbrella. Claire and the survivors make it to the helicopter and head for Alaska.

Alice stays and finds the entrance to the underground of Umbrella and investigates. She finds the child program of the first film who tells her that Issacs has become a monster due to being bit by a zombie and mixing that with Alice’s blood. Alice finds her clone program, one of which dies in her arms. Issacs shows up and fights Alice. The fight leads to the laser grid from the first film where a laser is about to kill them both. The laser kills Issacs, but stops before hitting Alice. The clone that died earlier came back to life turned it on.

In the Tokyo Umbrella facility, the leaders are discussing the incident in Vegas when a projection of Alice shows up and says she is on her way to Tokyo with some friends to finish everything. She and her clone look into a room where you see tons of Alice clones coming to life. 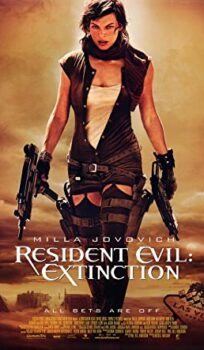