Pooper:
Alice survives, releasing an airborne antivirus which will (eventually) wipe out all zombies and save mankind.

Longer spoilers:
Alice is a clone of Alicia Marcus, the daughter of the creator of the t-virus and 50% owner of Umbrella. Alicia records her memories of her childhood before her death so Alice can have access to the memories she doesn’t possess. Doc was the umbrella employee and spy. The Dr. Isaac Alice killed in Extinction was a clone, as was the one she met on the road in Final Chapter. The anti-virus did not kill Alice, it killed the t-virus in her curing her. The cure  will take an unknown amount of time to spread and kill all the zombies however so Alice intends to keep traveling and killing zombies until it does. 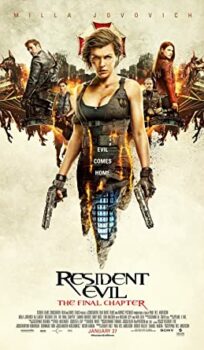