Ronnie (Joe Mullaney) and Will (Vincent Friell) quickly become a media sensation in their masked highwaymen identities to the point where they make the news in the U.S. and Japan, and tourists actually start trying to get on buses that have a good chance of being held up by them. However, a rift soon starts to form between them due to Will revealing this pastime of theirs to his new girlfriend Margot (Teri Lally) (a tour guide whose bus they once robbed) and letting her in on everything they’ve done, and Ronnie secretly becoming mixed up with Nigel (Iain McColl), a legitimate criminal, who wants to see him step up his game and rob bigger targets. Will’s sister Isla (Rachel Boyd) then deduces that he and Ronnie are the famous outlaws, and she and her friends confront Will about it one evening. Will buys their silence by promising to make them honorary members of his and Ronnie’s operation and get them some jewelry. He calls Ronnie at his apartment and lets him know about the deal he made with the kids, not knowing that Ronnie is hanging out with Nigel, but Ronnie heedlessly tells Will to keep his head screwed on and that they are big-time now and kids could get damaged messing with people like them, then he hangs up on him. Later, after Ronnie and Will barely manage to avoid capture at the hands of Detective Inspector Baird (Robert Urquhart), C.I.A. Agent Bender (Ned Beatty), and the police while out on another hold-up, Bender gives Baird a message from the Scottish Secretary of State saying that Baird has been relieved of his command of the operation to capture the highwaymen and he is now in charge of it.

One day, Will finds that Ronnie isn’t working at the joke shop, so he goes to his apartment and discovers that he is having a party there. He also finally learns that Ronnie has been hanging out with Nigel when he sees him there, and he is alarmed because he knows that Nigel has already been to prison four times and carries a gun on him. Will is then forced to join the party, and he learns that Nigel wants to be a part of their next hold-up in Strathalt tomorrow before being coerced into welcoming him aboard. Will later informs Margot about the situation he has found himself in, which upsets her because Nigel’s involvement now threatens the safety of him, her (since she is scheduled to be the guide for that trip), and the other tourists, and she almost tells him that she loves him, but stops just short of saying it. Though he kisses her to try to give her some assurance that things will be alright, she ends up walking off disappointed. However, Bender and another policeman soon apprehend her and take her travel itinerary for the bus, suspecting her of having ties to the robbers. In the middle of this, Isla’s young friend Mary (Laura Smith) is brought before Baird by a policeman after he noticed that she was wearing some necklaces too expensive for a little girl to have, and Baird tries to bribe her with toys and candy to get her to tell him who or where she got them from, but she keeps her lips sealed.

Will later finds Ronnie sitting in the cemetery next to the (supposed) grave of his father, and he tells Ronnie that he can count him out of tomorrow’s hold-up. He then asks Ronnie what he plans on doing, and Ronnie says that he intends to pull off a heist that will really get people talking and get him some status. Will suggests that they go into hiding in Penicuik and brings up how Margot almost told him she loved him, prompting Ronnie to tell him to look at the gravestone. He informs Will that this grave actually belongs to a complete stranger and he just picked it at random, and this is meant to show to Will that he is not like him because he has no one to tie him down, and he believes he is going places. Will enlightens Ronnie to the fact that he has been keeping him tied down, reminding him of how he gave him jelly sandwiches to eat every day for more than a year so he could save up the money to buy his motorcycle, and he asks him who will be there to care for him when he and Nigel likely meet some criminals who are worse than them. He then walks away, but Ronnie discards his leather coat that he got with some of the money from the thefts and catches up with him, having accepted that he is right.

Meanwhile, Bender interrogates Margot, and ultimately tells her that he plans to join her on her tour bus tomorrow, intending to catch the outlaws in the act. Ronnie and Will go to the latter’s home to pack up to go into hiding, and Isla appears as they are doing so. After Will tells Isla that he and Ronnie are going away for a while, she informs him that the police brought in Mary and have been trying to get her to talk about where she got her necklaces from. Fearing that Margot will also be questioned, Will tries to contact her at home and at her workplace, but he is unable to reach her. Will decides that he must go after the Strathalt bus, and Ronnie agrees to come with him, but they both accept that their days as highwaymen are over after this.

The next morning, Ronnie and Will put on their disguises and leave for the Highlands, but they drive right through Edinburgh along the way and get cheered by many passersby. Baird gets a telex from the Secretary of State, and though the viewer doesn’t find out what it says, it brightens his mood, and he tells his subordinates to get Bender because everything has changed. Then, he receives word that the robbers are on the move, so he and a bunch of cops set out in pursuit of them. When Ronnie and Will reach the countryside, they are able to lose the police thanks to a herd of sheep blocking the road. They find and intercept the tour bus, but when they get on, Bender – dressed as a female tour guide – reveals himself with gun drawn to arrest them. Suddenly, Nigel – disguised as an old woman – gets up wielding a shotgun and takes Margot hostage, and when Will moves toward her to help her, Bender grabs him and uses him as a human shield while he stands off with Nigel. Nigel yells at Ronnie to hit Bender with the powder from his signature puffer gun, but Ronnie instead turns the puffer on Nigel and blinds him. The police then arrive, and Ronnie and Will get applauded by the tourists while Will embraces Margot.

Nigel is arrested and taken away, and Ronnie, Will, and Margot are cuffed and placed in an armored truck along with Ronnie’s motorcycle. When Bender orders the guys to unmask, Baird suddenly closes the truck’s doors on him before he can see their faces, then hands Bender the telex and tells him that there has been a bit of a change. Bender reads it and gets upset, but he can do nothing but watch as Baird takes the truck and drives away. He stops at the edge of a secluded cliff overlooking the sea and has Ronnie, Will, and Margot get out, and he first tells the two men that tourist spending has gone up 15% since the start of their robberies and they have become incredibly popular. However, he has received orders from the Secretary of State to handle this whole matter with the utmost discretion, citing it as a “political hot potato”, and he tells the guys that he cannot simply let them go. Instead, what he does (off-screen) is send the motorcycle over the cliff to the rocky beach below, and he concocts a story for his superiors and the press saying that the highwaymen, in a desperate bid to escape the tightening grip of the law, committed suicide by driving off the cliff to their deaths in the sea. It is then arranged for Ronnie and Will – as well as Margot – to “vacation” in New Mexico until the media frenzy surrounding their outlaw personas blows over, after which they can come back home and lead normal lives again. The guys are content with going down in history as local legends, and Ronnie mentions over dinner one night that they have invested in bonds.

A few months or so later, the trio return to Edinburgh, and the guys purchase a new motorcycle with a sidecar to accommodate Margot. They are last shown taking a pleasant ride together up to the top of Arthur’s Seat. 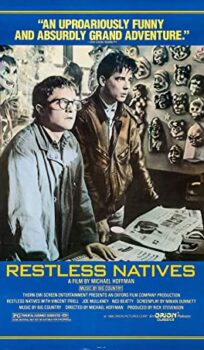