NOTE: Despite the name of the title, the film was made before Enter the Dragon and is not a sequel to it, nor does it pick up were Enter the Dragon leaves off. This was the first and only feature film written and directed by Bruce Lee

Tang Lung (Bruce Lee) arrives from Hong Kong to Rome, Italy, to aid his cousin Chen Ching Hua (Nora Miao) when her restaurant, workers and customers, are being harassed by roman thugs run by the boss (Jon T. Benn) and his interpreter/right hand man Ho (Ping-Ao Wei) who want to buy the land that it’s on (If you seen movies like that they always say “No sale” or something like that)

During a recent harassment outside, Jimmy (Unicorn Chan) one of the waiters try to take one of the thugs with karate, which proved useless. Tang Lung steps in and single handily defeated the group. After recent attempts to get Tang lung out of Rome (more fights, an assassination attempt, and kidnapping Chen Ching Hua, which ended in intense yet hilarious display of kung fu and slapstick.) they decide as a last resort to hire three martial artist, one from Japan (Ing-Sik Whang) one from Europe (Robert Wall) and American martial artist, named Colt (yes that’s right Walker Texas Ranger himself Chuck Norris).  After a long fight Tang Lung and the rest of the waiters disabled the european and and japanese fighters, and Tang Lung chases after Ho.

Meanwhile it turns out that The head chef of the restaurant Uncle Wang (Chung-Hsin Huang) was working for the thugs the entire time and kills the waiters for knowing too much (except for Ah Quen (Chin Ti) and Chen Ching Wa who earlier went to get the police) Tang Lo chases o all the way to of all places the roman coliseum where Ho locks the entrance gates.  Tang Lung runs into Colt and engages in a climatic battle against him (It was rumoured that chuck and bruce actually hit each other during the scene) as a result Tang Lo breaks Colts arm and leg.  Colt not willing to give up, despite Tang, warning him lunges at him and gets caught in a head lock which in turn causes his neck to break killing him instantly.  Tang Lung quickly figures out that Ho escaped during the fight and chases after him (not before yelling “YOU BASTARD!!!”) leading him back to the park where the previous fight took place, Wang, cuts himself to look like he was a victim in the attack on the waiters.

The boss comes afterwards in his car, shoots Ho and Wang and tries shooting Tang lung, in  a short battle between darts and bullets.  The cops come along with Ah Quen and Chen Cheng Wa and arrest the boss.

Later that day, after the waiters funeral Tang Lung says goodbye to Chen Cheg Wang and Ah Quen before walking back to the airport and back to Hong Kong.  As he is walking Ah Quen says the most memorible line “In this world of guns and knives, where ever Tang Lung may go, he will always travel on his own.” 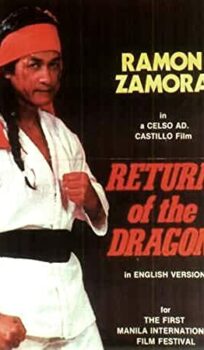