LONG VERSION:
A long time ago in a galaxy far, far away – Years after the last film, the heroic Rebel Alliance is still reeling from defeats at the hands of the evil, galaxy-ruling Empire. Worse yet, the Empire is rebuilding its massive, moon-sized, planet-destroying starship, the Death Star. Although the Rebels are trying to focus on a desperate final assault on the Empire, Jedi knight Luke Skywalker (Mark Hamill), Rebel leader Leia Organa (Carrie Fisher), androids “droids” C-3PO (Anthony Daniels) and R2-D2 (Kenny Baker), the furry alien Chewbacca “Chewie” (Peter Mayhew), and now-Rebel general Lando Calrissian (Billy Dee Williams), decide to rescue their friend Han Solo (Harrison Ford). Han had been frozen and delivered to the alien gangster Jabba the Hutt (voiced by Larry Ward) after being captured by the second in command of the Empire, the Dark Jedi cyborg (and Luke’s father) Darth Vader (acted by David Prowse and Harold Cole, voiced by James Earl Jones).

The heroes converge on Jabba’s palace, and although they manage to unfreeze Han (who passionately kisses Leia), they are all captured before leaving his stronghold. Jabba brings them to a pit in which a giant creature named a Sarlaac lives. Jabba plans to throw the men into the jaws of the Sarlaac and keep Leia and the droids as slaves. The heroes manage to ambush Jabba’s forces. Leia kills Jabba, and Jabba’s favorite bounty hunter Boba Fett (acted by Jeremy Bulloch, Nelson Hall, and Don Bies) is knocked into the Sarlaac pit, where he is devoured. The victorious heroes return to the Rebel base except for Luke, who flies off with R2-D2 to continue his Jedi training with the ancient, alien Jedi master Yoda (voiced by Frank Oz). Luke is being trained to use the Force – which is a universal, intangible power source that gives special powers to those who can tap into it.

When Luke arrives, he finds Yoda close to death. Yoda explains that while Darth Vader is, in fact, Luke’s father, Darth Vader is a shell of the man he was (named Anakin) before he was corrupted by the Emperor and the Dark Side of the Force. Yoda also reveals that Leia is Luke’s sister and also able to use the Force (being the “other” that Obi-Wan referred to in the last film). Luke vows to defeat Darth Vader by convincing him to turn away from the Dark Side. Meanwhile, Darth Vader consults with Palpatine (Ian McDiarmid), who is the Emperor and Vader’s own Jedi master. The Emperor explains that by rebuilding the Death Star, he knows the Rebels will be forced to attack to stop it from being completed. In so doing, the Rebels will fall into his trap. Palpatine also orders Vader to convince Luke to join them by any means possible.

Luke returns to the Rebels, and they are planning an attack on the under-construction Death Star. They note that the Death Star is being protected during construction by a force field generated from a nearby planet named Endor. The Rebels plan to send a small force to the planet (led by Leia, Luke, C-3PO, Han, and Chewie) to disable the forcefield generator and send the rest of their forces (led by alien admiral Ackbar (acted by Tim Rose, voiced by Erik Bauersfield), Lando and R2-D2) to destroy the Death Star once the shield is down. Leia’s forces, thanks mainly to the efforts of C-3PO, befriend the native alien species named Ewoks (including Warwick Davis as the Ewok named Wicket) and get their assistance in fighting the Empire. Luke tells Leia that she is hos sister and that Darth Vader is their father. Luke then departs the group to surrender to Darth Vader so that they can talk and Luke can convince him to reform.

Darth Vader brings Luke to the under-construction Death Star where Palpatine awaits. On the way, Luke tells Vader that he can still sense the good in Vader (who denies having any goodness left). On arrival, Palpatine explains his plan to Luke. He details that he’s arranged an ambush of Leia’s forces, meaning they will fail to destroy the forcefield. He also reveals that while the new Death Star appears to be under construction, it is actually fully operational. When Lando and Ackbar’s forces arrive, the Death Star’s firepower and space fighters will obliterate them. In so doing, the Empire will have finally crushed the Rebels once and for all. Palpatine encourages Luke to embrace his anger and try to stop him, explaining that by giving into his hate, Luke will fall to the Dark Side of the Force. Luke refuses to give in to his rage.

The Rebel fleet arrives and begins being slaughtered by Empire ships as the forcefield remains in place. With the help of the Ewoks, Leia’s forces are freed after they’ve been captured by Palpatine’s ambush, and she manages to deactivate the forcefield. Impressed with Leia, Han declares his love for her (to which she responds in a callback to the last film – “I know.”). With the forcefield down, the Rebels begin to rally, and Luke engages in a lightsaber (laser sword) duel with Darth Vader. This time, Luke cuts off Vader’s arm and is in a position to deliver a fatal blow. Luke refuses to kill Vader, which enrages Palpatine. In sparing Vader, Luke again rejects the Dark Side of the Force. The Emperor then uses the dark power of the Force to shoot lightning at Luke. Hearing his son’s screams of pain, Vader finally betrays his master. He tackles the distracted Emperor, lifts him in the air, and throws him down a giant chasm to his death. Meanwhile, Lando manages to infiltrate the new Death Star and blows up the reactor. Those on the Death Star begin to evacuate before the whole thing blows up.

Luke tries to drag Darth Vader off the ship, but Vader’s wounds (in addition to having his arm lopped off, he was also struck by Palpatine’s lightning) are too great. Luke tells Vader that Leia is his daughter and Darth Vader takes his last breaths happy, knowing there was still good in him and that his two children saved the galaxy from the Empire’s tyranny. Luke departs as the new Death Star explodes in spectacular fashion.

The Rebels celebrate with their Ewok allies. Leia tells Han she is Luke’s sister (thus no romantic attachment), and the pair embrace. Luke sees the spirits of Obi-Wan Kenobi (Alec Guinness), Yoda, and pre-Vader Anakin Skywalker (Sebastian Shaw and Hayden Christensen) also celebrating the victory. The film ends with one last shot of the victorious heroes. 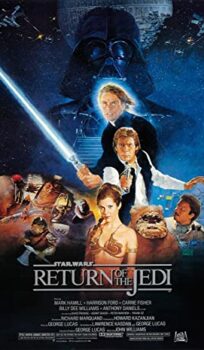