Yul Brynner is the only actor from “The Magnificent Seven” to appear in the sequel.

POOPER
Lorca is killed, but so are Luis, Frank, and Manuel.  Chico decides to merge the villages and settle on Lorca’s land, and Colbee will stay as well.  Chris and Vin ride back across the border.

LONG VERSION
Chico (Julian Mateos), the only surviving original seven member who stayed in Mexico, is now married with a son and still living in the same village that was under siege from Calvera and his men.  Another group of gunmen arrive and take all of the men, including Chico, and march them into the desert.  Chico’s wife Petra and their son ride across the border to find Chris (Yul Brynner) and Vin (Robert Fuller), the other surviving members of the original seven, and once again asks for their help.  Just like the first time, Chris goes through town to find hired guns to help them.  He buys the release of Frank (Claude Akins) and Luis (Virgilio Teixeira) from the local jail, and also recruits Colbee (Warren Oates) and Manuel (Jordan Christopher).  As they ride off, Chris tells Vin that once they free Chico, they will have seven.

Once they arrive at the village, they learn from the remaining women that their men, as well as the men from two other villages, were taken so they can build a church on land held by a wealthy rancher named Francisco Lorca (Emilio Fernandez).  Lorca’s two sons are dead, and the church is to be a memorial to them.  Chris and the others ride to where the church is being built, and he convinces Lorca and his men to leave, which they do.  Knowing that Lorca will return to fight for his land, Chris and the others, including a now-free Chico and the other captives, fortify the construction site and prepare for battle.  The captives are not able to help fight, so the seven are the only ones to fight the approximately 50 gunmen.

After a pair of battles that kill many of Lorca’s men, he then orders all of his ranch hands from his hacienda to come with as many weapons as they can carry to kill the seven.  Now with nearly 200 men, Lorca attempts one last attack against the seven.  In the resulting battle, Luis is killed and Colbee and Chico are wounded.  Just then, Manuel and the captives begin throwing recently discovered dynamite at the gunmen, killing many of them.  The gunfight continues, and Frank is killed when he jumps in front of a bullet from Lorca meant for Chris.  Chris then shoots Lorca, killing him.  This causes the remaining gunmen to flee the area.  As they are leaving, Chris sees that Manuel was also killed in the gunfight.

Some time later, the women from the three overrun villages are reunited with their husbands, including Petra and Chico.  It was Chico’s idea to merge the three villages into one and settle on Lorca’s land and to finish building the church.  Colbee decides to stay in Mexico to help the villagers in defending themselves and to pursue the unmarried women.  The movie ends with Chris and Vin riding back across the border. 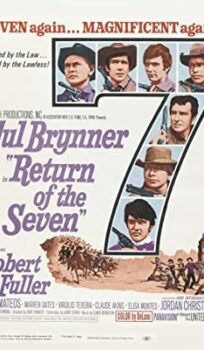