POOPER: As Lewis is standing trial for embezzling college funds (which Orrin had done and framed him for), his father and his old Tri-Lamb pals from the first two films show up to support him. Moved by the support that Lewis has, Stan – who had come to see Lewis as like a friend and was regretting his alliance with Orrin – decides to come clean in front of the court, exposing Orrin as the real embezzler and how he was also the one who planted the marijuana in the Tri-Lambs’ house. He also tells Lewis that he wants to truly be friends with him, and that he has realized that, deep down, he is a nerd as well. The case against Lewis is dismissed, and Orrin is placed under arrest. Knowing that Stan will likely be in danger of losing his job as the Dean because of how he knew about Orrin’s crimes, Lewis and the other nerds tell him that they will do all they can to make sure that he retains his position.

LONG VERSION: As Booger (Curtis Armstrong) and the Tri-Lambs go to court in an attempt to get an injunction restraining Stan (Ted McGinley) from overstepping his power and discriminating against the Tri-Lamb fraternity (which they are denied by the unsympathetic judge), Orrin (Morton Downey, Jr.) and his son Adam (Tim Conlon) plant a large amount of marijuana in their frat house. As the Tri-Lambs are having a party at their house that night to take their minds off of their defeat in court, two cops (obviously called to the scene by Orrin) show up with a search warrant, find the marijuana, and arrest everyone. Soon after, their frat house is confiscated and given to the Alpha Betas. After finding out about what Orrin did, Stan tells him that he went a little too far and that he doesn’t want to be a part of anything to do with drugs. Orrin responds that he will be a part of anything he wants him to be a part of.

A short time later, Lewis (Robert Carradine) confronts Stan in his office over the arrest. Since Orrin is around, Stan refuses to admit that the Tri-Lambs were framed, and when Orrin asks Stan if Lewis is a friend of his, Stan denies it (though he is conflicted about that, since he had come to bond quite well with Lewis). Hurt by the betrayal, Lewis heads home and puts on his old nerd attire, then bails the Tri-Lambs out of jail and starts making plans with them to put the nerds back in power.

After the Tri-Lambs pull a few pranks on Orrin and the Alpha Betas, Lewis gets on the college’s radio station and announces that there will be a nerd strike in protest of their mistreatment, and he also asks for anyone who either was a nerd or knows a nerd to come and take part in it. As a result, not only do the nerds on campus join the picket line, but so do a huge number of city workers, grinding such things as utilities to a halt. Lewis eventually tells Ira (Richard Israel) to contact all of the ex-Tri-Lambs across the country so they can come and participate in the strike.

Meanwhile, Orrin tells Stan of how he plans to end the strike by framing Lewis for misusing college funds. Earlier in the film, Orrin had Stan have Lewis sign some monthly appropriation request forms, but Stan was unaware until now that Orrin had used part of those monthly appropriations to buy frivolous things. After Orrin warns him to keep quiet about it if he wished to remain the Dean, Stan really begins to wonder if he should continue to remain aligned with such a vile man like him.

Orrin commences with his plan, and Lewis is arrested and the strike is ended. One night, Betty (Julia Montgomery) clandestinely pays Stan a visit in his office and tells him that he must tell the truth about Lewis and get him released. She also says that she would do anything to save him, and Stan wonders aloud if she is implying that she’ll get intimate with him in exchange for his cooperation. Betty asks him if that’s what he wants, and he admits that it isn’t, saying that he still has a little pride left.

In court, things initially don’t go well for Lewis, but he is then surprised by the arrivals of his father (James Cromwell) and his old Tri-Lamb pals from the first two films, who have come to support him. Moved by how Lewis has so many friends willing to stand by him, Stan decides to come clean, declaring before the court that Orrin was the one who embezzled the college’s funds and planted the marijuana in the Tri-Lambs’ house. He apologizes to Lewis and tells him that he wants to truly be friends with him, and that he realizes that he is a nerd, too (“trapped in a beautiful body, but a nerd nonetheless”). The case against Lewis is dismissed, and as Orrin is being placed under arrest, he swears to Stan and the nerds that he’ll get even with them.

As the nerds celebrate, Stan reveals that he always wanted to read and get good grades, but his parents wanted him to be popular and play sports, so he caved in to their wishes. Knowing that Stan will likely be in danger of losing his job as the Dean because of how he knew about Orrin’s crimes, Lewis and the other nerds tells him that they will do all they can to make sure that he retains his position. 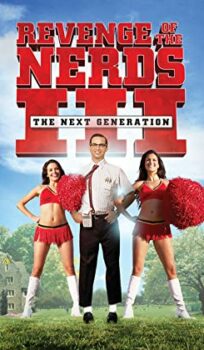