On the day of the wedding, Chip (Stephen Davies) brings Booger’s (Curtis Armstrong) supposed illegitimate child Heidi (Sophie Buhai) into the picture, prompting Jeanie (Corinne Bohrer) to call off the wedding again because she thought Booger had lied to her when he said he didn’t have an illegitimate child when Chip first accused him.

After he has a walk and chat with Heidi, Booger decides that he can’t give up on Jeanie, so he goes to her house and speaks with her. She tells him that Heidi’s arrival has left her all confused, and she needs some time alone to think about it all, but she changes her mind when Booger sings her favorite song “Bonnie Jean” to her. They kiss, and the wedding is back on.

Just as Jeanie is reaching the altar, Betty (Julia Montgomery) starts going into labor. Heidi then admits to Booger that she’s not really his daughter and that Chip had got her from an orphanage. This admission – in addition to a couple of other big screw-ups Chip made throughout the film – causes Chip’s wife to call an end to their marriage and Aaron (Joseph Bologna) to expel him from the family. As he leaves, Chip loudly blames the nerds for his misfortune, and vows revenge. Aaron then apologizes to everybody – especially Booger – for his behavior, and declares that he is nouveau riche and proud of it. He then tells Mylan (James Karen) that if who he is isn’t good enough for the Republican Party of this state, then he doesn’t care about their gubernatorial nomination. 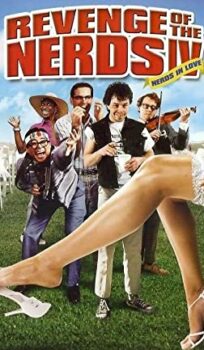