When Clouseau (Peter Sellers) realizes that the world thinks he has been killed (due to a mix-up with a wandering transvestite crook) he decides to go undercover with his manservant Cato to figure out who wanted him dead. They accidentally rescue Simone (Dyan Cannon), the mistress of the French mob titan Douvier, and learn from her that Douvier ordered the hit (to impress the American Mafia his group is connected with). Moreover, Douvier is headed to Hong Kong to arrange a heroin deal with the Americans.

Clouseau, Cato and Simone travel to Hong Kong and she successfully intercepts the Mafia don; Douvier and his men take Clouseau (disguised as the don) to the dockyard to make the smuggling arrangements. Soon both the American mobsters and the French police (headed by Dreyfus, who overheard Simone telling Clouseau about this when they had to hide in his apartment) arrive, and a chase ensues that culminates in a literally explosive encounter in a fireworks factory.

Having helped take down the mob, Clouseau is awarded the Medal of Honor for a second time.

The film ends with him and Simone going out on a date together. 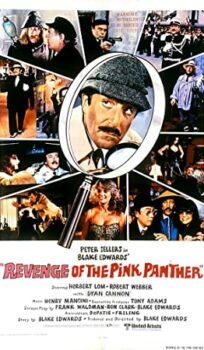