After untying Linda and Tulio, Blu (Jesse Eisenberg) rallies the flock of blue macaws to fight against the illegal loggers. “Birds of blue feather, fly together!”

The rival red macaw flock, other jungle animals, and Linda (Leslie Mann) and Tulio (Rodrigo Santoro) join them, and they all manage to break up the bulldozers and chase away the loggers. It is implied that the evil owner of the operation is eaten by a snake.

Gabi (Kristin Chenoweth) accidentally poisons Nigel (Jemaine Clement) and he finally gets a round of applause for his theatrical death scene… but! It turns out Gabi is NOT a poison frog, and she and Nigel are taken back to Rio for veterinary care. Linda and Tulio ensure that the blue macaw habitat is protected as a nature reserve.

Blu agrees that he can get used to living in the jungle, but Jewel (Anne Hathaway) says they can spend summers in Rio. Nico (Jamie Foxx) and Pedro (Will.i.am) have their Amazon-inspired show in the jungle in the last big musical number. 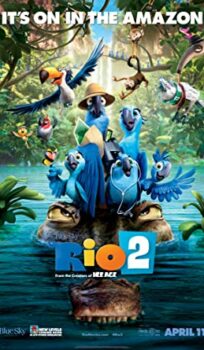