Colonel Kirby Yorke (John Wayne) is stationed at a fort near the Rio Grande.

A group of new recruits arrives and much to his surprise, it includes his son Jeff Yorke.  Kirby Yorke is estranged from his wife and has not seen his son since he was a baby.  He is even more surprised when his wife, Kathleen Yorke,  shows up to take Jeff home, because she thinks he is too young to be in the army.  In the civil war,  Kirby Yorke served under Gen. Sheridan and his men were ordered to burn down southern plantations, including the home of Kathleen’s family. This led to their estrangement.  To take Jeff home, she needs the signature of his commanding officer, which Kirby won’t give.  In the midst of this, the local indians are becoming hostile.  Due to the danger, all the women and children are sent in a wagon train to a larger fort, while the cavalry prepares to pursue the indians.  However, the wagon train accidentally comes upon the indians.  A wagon load of children is captured by the indians, and taken across the Rio Grande into Mexico.  In the past, the U.S. cavalry always had to stop at the border letting the indians escape safely to Mexico.  The indians do not realize they have now given Kirby Yorke the excuse he has long wanted to puruse them into Mexico.  The indians spend the night carousing and drinking to celebrate the kidnapping.  In the morning, the cavalry attacks and rescues the children.  Jeff fights bravely in the rescue, making Kirby proud of his son.  Kirby is injured in the fighting but recovers. Kirby and Kathleen get back together in the end.

In the subplot, Trooper Travis Tyree is accused of manslaughter.  He describes it as an honor killing to defend his sister.  He runs off to the desert to avoid the sheriff.  He leads the cavalry to where the children are being held and plays a critical role in rescuing the children.  At the end, the sheriff returns for him again.  Kirby Yorke lets Tyree escape with a head start on the sheriff. 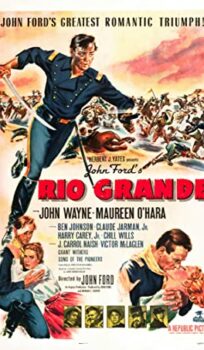