Jewel is kidnapped by Nigel and brought to Marcel just in time for them to take off with the rest of the captured birds. Blu tries to get her out, but is locked in a cage himself. Blu manages to get himself and Jewel out by attaching a bungee cord to a fire extinguisher. The rest of the birds are quickly set free by Blu and Jewel. Blu then uses the fire extinguisher to eject Nigel from the plane. Nigel then meets with the business end of the plane’s propellers. In the struggle, Jewel’s wing is injured.

Blu embraces Jewel as they fall. She kisses him, and he finds the inner strength to fly. They return to Linda and Tulio. Linda decides to help Tulio open a bird conservatory for Blu and Jewel to fly freely in their own environment. Linda moves to Brazil to stay with Blu and Tulio, her new lover.

It is revealed early credits that Nigel survived. 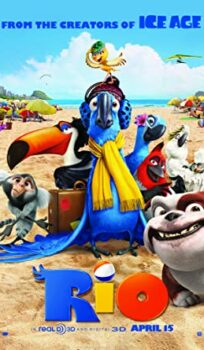