POOPER
Clavius sees Yeshua alive, and knows that He is the Messiah.  He quits the Roman Legion and follows Yeshua with the other disciples.

LONG VERSION
Set in ancient Judea (present day Israel) on a Friday in the year 33 AD, Roman Tribune Clavius (Joseph Fiennes) has just put down a Jewish revolt when he is summoned by the region’s Prefect, Pontius Pilate (Peter Firth).  Pilate wants Clavius to go to Jerusalem and assist in the crucifixion of the popular Rabbi Yeshua, a.k.a. Jesus Christ (Cliff Curtis).  Pilate also assigns him a new aide, Lucius (Tom Felton).  Clavius and Lucius arrive to find Yeshua already on the cross, alongside two thieves.  Clavius sees the the suffering from the locals concerning the imminent death of their “Messiah” and orders a soldier to kill the trio.  He breaks the legs of the thieves and pierces the side of Yeshua.  Almost immediately, an earthquake occurs.  Once the commotion settles down, Clavius sees a bloody tear on the cheek of the now dead Yeshua.  His body is placed inside a stone tomb, and after it’s sealed, two soldiers are ordered by Clavius to guard the tomb from being disturbed by His disciples.  Upon leaving them, the two soldiers pull out a flask of wine and proceed to get drunk.

On Sunday morning, Clavius is summoned by Pilate, who tells him that Yeshua’s tomb has been opened and is now empty, and the guards ran off.  With the help of the Sanhedrin (the local religious leaders), who believe Yeshua’s disciples are responsible, Pilate orders Clavius to track down all of the disciples and find Yeshua’s body.  If he doesn’t, then the disciples claims that the Messiah has risen from the dead will be thought to be true, and the Sanhedrin and the Romans don’t want that.  With the assistance of Lucius, Clavius begins to track down those who knew of Yeshua and his “miracles”.  He finds Mary Magdalene, and later the Apostle Bartholomew.  Both admit knowing of Yeshua and claiming He is the Messiah, but neither will give up the names of the other disciples.  Clavius then finds one of the missing guards, who tells him that the disciples broke into the tomb and stole the body, but Clavius confronts him with the wine flask that was left at the tomb.  The guard then admits that the Sanhedrin paid him to say that, and what they actually saw was a blinding light and a figure emerge from the tomb, but Clavius doesn’t believe him, claiming it a drunken vision.

Several days have passed, and by now the body of Yeshua must be decomposed, so believes both Clavius and Pilate.  Pilate wants Clavius to move on to another assignment, but he would rather continue his investigation of the disciples.  Lucius then informs Clavius that they have tracked down the disciples, and the Roman Legion arrives to arrest them.  Clavius enters the room by himself, and he sees Mary Magdalene, Bartholomew, the other disciples…and a very much alive Yeshua.  When Lucius tries to enter, Clavius doesn’t allow him and sends him and the other soldiers away.  Clavius reenters the room and is still in shock by what he is seeing.  Suddenly, Yeshua disappears, and Mary tells the disciples that He told her to have everyone meet Him in Galilee.  Clavius, who throughout the movie has been questioning his beliefs of the Roman gods, and now knowing that Yeshua is indeed the Messiah, decides to join them.  Later, the soldiers, led by Lucius and Pilate, return to the room and find it empty except for a note from Clavius.  He says he is not to be followed, and will continue to pursue the disciples by himself.  The next day, Pilate promotes Lucius to Tribune, and orders him to arrest Clavius and bring him and the disciples back to Jerusalem.  If Yeshua is indeed alive, he will have Him killed again.

Clavius and the disciples are walking through the Judean Desert, on the way to Galilee, when they notice the Roman Legion is following them.  Clavius is helping them avoid the Romans when they are met by Lucius, who draws his sword on him.  Clavius is able to disarm him and tells him that no one is getting killed today, and he convinces him to let the disciples go.  Now in Galilee, the disciples decide to go fishing, but with no luck.  Soon, a man walks by and tells them to cast their nets on the other side.  They do, and the nets are full of fish.  That’s when Simon Peter realizes the man walking by is Yeshua.  Later, the disciples, Clavius, and Yeshua are feasting on the fish when a leper appears nearby.  The local residents try to drive him out, but Yeshua stops them, and He lays His hands on him to heal him, and his scars immediately disappear.  That night, Clavius talks to Yeshua, and he begs forgiveness for having a part in his death.  Yeshua does forgive him, and Clavius says he will now follow Him for all eternity.  The next day, Yeshua tells the disciples that He is making a place for them in Heaven, and to spread the Gospel throughout the world, and He will be with them always.  He then ascends into Heaven with a blinding flash of light.  The disciples then say their goodbyes, and begin to walk to the ends of the earth, spread the Word.  Clavius also leaves, and begins to wander in the desert.  He ends up at an inn, and as the movie ends, he tells the innkeeper that he has learned a lot from Yeshua, and his life will never be the same. 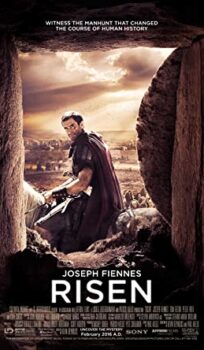